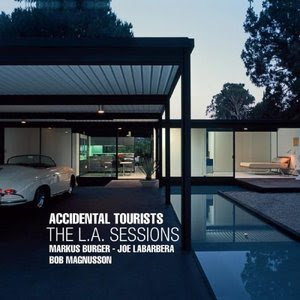 There was a time when jazz trio albums were plentiful. But over time, the supply and quality of those albums seemed to dwindle, but every so often, an unbelievably good trio jazz album such as the recently released “Accidental Tourists The L.A. Sessions” surfaces, warranting a conversation.“Accidental Tourist” is the creation of jazz piano player Markus Burger. The album will immediately remind you of the string of banner trio albums the late Bill Evans masterminded. Burger is not an Evans emulator, but his serious piano playing begs comparison to Evans. On “Accidental Tourist,” Burger tosses you the keys to the album and encourages you to take it out for a test drive. The album has some easy to spot standards, but Burger and his staff—drummer Joe Labarbera and bass player Bob Magnusson—sound their liveliest on Burger’s originals “Air Canada,” “Black Sea Pearl,” and “Rodeo Drive Hustler”.
Posted by Charles L. Latimer at 4:06 PM