When jazz pianist Benny Green plays New York jazz clubs word has it getting a ticket is nearly impossible. Those who caught Green’s concert Saturday evening at Kerrytown Concert House in Ann Arbor, MI experienced firsthand why he’s such a major draw. The concert was his first time performing at the venue. Green performed with his trio bassist Dave Wong and drummer Rodney Green, two jazz geniuses in the making. Before the trio played the set-list that included compositions by jazz royalty Horace Silver, Cedar Walton, and Kenny Barron, Green gave his sidemen one of the most touching introductions I’ve ever heard. To paraphrase Green, he was thrilled to reunite with them. He genuinely loves them. He thinks about them daily, and they inspired him to keep practicing and striving. Then Green turned his attention to the Kerrytown piano and put it through a workout surely it has never been subjected to before. The concert had many stunning moments. On “Pittsburgh Brethren,” “Clockwise, “and “St. Vitus Dance,” Green had the piano sweating and gasping for air during his solos. Green gave the piano a breather when the trio played the ballad “Theme for Ernie,” which Green infused with some blues licks. The only downside was Wong and Green only had a few solos.  After “Theme for Ernie,” Green called two tunes by Kenny Barron “Seascape,” and “Golden Lotus”. Green can play lines just as fast as bop immortal Bud Powell could during his heyday. Most of Saturday evening, Green was playing the piano so fast I believed his fingers were going to explode.
Posted by Charles L. Latimer at 6:16 PM No comments:

Drummer Sean Dobbins’s band, the Modern Jazz Messengers, have been a mainstay in Detroit’s jazz world nearing ten years. Like the band's inspiration Art Blakey and the Jazz Messengers, Dobbins is big on rotating the members and keeping the band’s frontline youthful and hard swinging.

The Modern Jazz Messengers songbook is heavy on hard-bop and post-bop staples, some of which the band performed Wednesday, the second night of a four-night residency at the Dirty Dog Jazz Café. The MJM – pianist Mike Jellick, bassist Marion Hayden, trumpeter Anthony Stanco, and saxophonist Johnathan Beshay – is Dobbins’s most tightly knit variation in the Messenger's ten-year history.

Dobbins is an exciting performer, who in the past was known to hijack the spotlight at any given moment of a performance. He's grown into a beloved, equal opportunity bandleader. He divvied up the lion share of the spotlight Wednesday evening to Stanco and Beshay. Beshay tenor playing has old-school magnetism a la greats such as Dexter Gordon, Joe Henderson.

As a trumpeter, Stanco is at home in the upper register of the trumpet, which was obvious when the MJM roared through Wayne Shorter’s “Ping Pong,” Chick Corea’s “Humpty Dumpty “and Dobbins’s “Sweet Revenge”.

Stanco showed what a terrific trumpeter he is when Dobbins deviated from the band’s game plan and called the ballad “Only You” and R& B vocalist Anita Baker’s 80’s gem “Sweet Love”. Dobbins dedicated the songs to a couple in attendance celebrating forty-seven years of marriage. Stanco soloing on each song induced goosebumps and some tears, too.

Stanco was blowing so tenderly and warmly I believed his trumpet was going to float out his hands. Listening to the Modern Jazz Messengers perform the ballad, and the R&B slow jam proved the band isn't just hard-bop and post-bop hell-raisers.
Posted by Charles L. Latimer at 5:26 PM No comments: 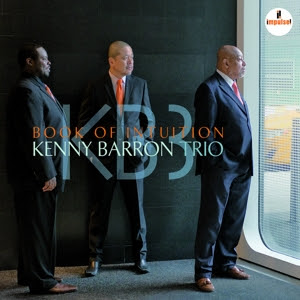 “Book of Intuition” is jazz pianist Kenny Barron’s new album out March 4th on Impulse Records. The album is a trio outing that Barron made with bassist Kiyoshi Kitagawa and drummer Johnathan Blake. Seven of the ten cuts on the album are from Barron’s songbook. There are two obscure Thelonious Monk compositions and one Charlie Haden jewel. In the jazz universe, Barron is seen as one of the most elegant and listenable jazz pianist alive. Listeners of this godsend of an album can pick any selection for proof of Barron’s gift to hook and dazzle listeners. Over the decades, Barron has led some fabulous jazz trios, which had members such as jazz saints bassist Ron Carter and drummer Roy Haynes. Barron has also led larger bands, the most beloved being the Thelonious Monk tribute band Sphere. But the trio is the best context to experience Barron. Nearing two decades now, Barron has been touring regularly with Kitagawa and Blake. And as “Book of Intuition” shows the musicians know each other’s musical psyche intimately. An often asked question is why so long for the trio to record. The cuts on “Book of Intuition” most likely to hit your spot are “Bud Like,” "In the Slow Lane,” and “Light Blue”. The former Barron called on the ghost of bebop icon Bud Powell. It was as if Powell’s ghost possessed Barron’s fingers given how Barron zoomed through the song’s changes. On Monk’s “Light Blue,” which Barron played solo, Barron took Monk’s spirit ground it to a fine powder and sprinkled it all over the studio piano. The long wait for Barron, Kitagawa, and Blake to record was worth the wait.
Posted by Charles L. Latimer at 1:32 PM No comments:

Legendary jazz bassist Ron Carter will be the Artist-in-Residence at the 2016 Detroit Jazz Festival. The festival is North America’s largest free jazz festival and takes place in downtown Detroit during the Labor Day wekend. Nearing four decades, the DJF has showcased the musical gifts of many internationally accomplished jazz musicians. For the past decade, the Artist-in-Residence chair has gained prominence.
The Artist-in-Residence participates in jazz outreach educational programming, and is a central attraction during the festival, presenting hotly anticipated projects tailored specifically for the festival. Regina Carter, Christian McBride, Mulgrew Miller, Joshua Redman, Jeff “Tain”Watts, Danilo Perez, John Clayton, and Pat Metheny are some of the globally respected jazz musicians who have served as DJF’s Artist-in-Residence.
Carter,78, a native Detroiter, and a graduate of Cass Technical High School, is arguably the most legendary musician to be appointed. Known as the most recorded jazz musician on earth, Carter has reportedly performed on a whopping two thousand recordings. In his storied career,

Carterhas blessed bands with his priceless musical acumen led by famed jazz musicians such as Miles Davis, Eric Dolphy, Lee Morgan, Freddie Hubbard, and Andrew Hill. As a bandleader, Carter has fertilized the planet with a bunch of remarkable albums such as “Where,” “All Blues,” ”Piccolo,” “The Bass and I,” “So What,” and“Dear Miles”.
Last year, he buoyed up the spirit of his fan base with one of his more ambitious projects to date “My Personal Songbook Ron Carter and The WDR Big Band” Carter summed up his philosophy as a bassist in a quote on his website Roncarter.net:

“I think that the bassist is the quarterback in any group, and he must find a sound that he is willing to be responsible for”. The music Carter has in store for the Detroit Jazz Festival will be announced in April during the DJF’s annual press conference.
Posted by Charles L. Latimer at 5:56 PM No comments: