Last week, I had every intention of writing a blog about your live album “The Gene Harris Trio Plus One” you cut at the Blue Note in 1985, which featured tenor saxophonist Stanley Turrentine, and was your debut offering for Concord Records. But I used the space I planned for you to eulogize saxophonist Donald Walden, who passed around the same time I rediscovered your album. Did you know Donald? If not maybe you'll cross paths with him up there someday.

I wanted to chat with you about this live date. During your career, you put out a substantial body of work, so I wonder if you remember this particular offering. Maybe describing the cover art will jog your memory. It's a facial shot of you with a cheeky smile, and it has the innocence of a high school yearbook photograph. You sported a goatee, and a short Afro. Staring at photo reminds me of all the fun your group seemed to have that evening, and the great time I experienced listening to it.

If you're curious, I rediscovered it a few weeks ago while alphabetizing my jazz CD collection, which currently occupies every inch of the four CD towers my wife purchased at Wal-Marts. I haven’t completed the task yet. Organizing CD’s is time consuming. I've contemplated hiring someone to finish the job because, honestly Gene, I don’t think I ever will.

The Gene Harris Trio Plus One transported me back to the exact moment in 2000 when I purchased and listened to the album for a solid month. I'm not kidding you. Every time I played the album it felt as if I was sitting in front of the bandstand. Listening to the album, I actually fantasized I replaced you. I can't recall every detail of the fantasy, for example, if you summoned me from the audience, or I if I simply imagined that I was you.

Anyway, I do recall fantasizing about sitting at the piano flanked by bassist Ray Brown, and drummer Mikey Roker playing the Battleship Hymn of the Republic and Brown’s Gene’s Lament. My ten fingers zipped across the piano keys. After those tunes I whispered to Turrentine's: “Lets play a ballad. Ray’s tune took a lot out of the crowd”.

I called Erroll Garner’s Misty. The ballad seemed to give the crowd time to catch their breath. But Turrentine and I didn’t allow them to become too relaxed. We hit them with Uptown Sop. The crowd cheered while Turrentine and I horsed around with the chord changes. Often when I listen to a remarkable recording I wish I was a musician instead of a writer. Maybe I will realize that in my next life.

I heard you liked your gigs to be loose, and you never prepared a set list. You want the music to be open. That’s what I loved about The Gene Harris Trio Plus One, the openness, the spontaneity, and how you made the crowd feel like they were at a neighborhood block party.
Posted by Charles L. Latimer at 4:49 PM 1 comment:

Donald, early this morning I founded out you passed away on Sunday after a lengthy battle with an ugly illness. Most of today, I reminisced about the first time I heard you play at the International Institute in 1995. You performed the music of pianist Thelonious Monk. I wasn’t a published jazz journalist yet. I was still feeling my way around the music.

You were the first jazz musicians I ever interviewed? Do you remember that interview? It was in 1996 a few months after Arts Midwest named you Jazz Master. You and Marsha had just moved into an apartment at 1300 Lafayette. The apartment had a great view overlooking downtown Detroit. A piano was in the living room. You set on a black leather sectional, wearing a white silk shirt and black slacks, holding a silver flute. A glass of red wine was on the coffee table.
I asked you how it felt receiving the Jazz Master award. You said humbly there were other jazz musicians more deserving. Then you talked on an on about your mentor pianist Barry Harris. Harris taught you and other fledging Detroit boppers who came of age during the 50’s everything he knew about Be Bop.

You said Harris was a task master, and there were times when his criticism was so brutal you left his Westside Detroit home damn near in tears. But you stuck it out. And you became an accomplished musician, a tenured professor, a bandleader, and a business man. You only made three albums as a leader, "A Portrait of You", "A Monk and a Mingus Among Us," and "Focus: The Music of Tadd Dameron". Three albums isn’t a lot, but they were gems nevertheless. You always struck me as an artist who was more concerned with quality than quantity.

Mid-way through our interview, I asked if you ever, like saxophonist Eddie “Lockjaw” Davis, quit playing to pursue a different occupation. You told me a funny story about pawning your tenor, and getting a gig delivering milk. For the life of me, I couldn’t imagine a guy as dapper as you delivering dairy.

You also told me about some lean times you had when you lived in New York. You said things got so tough once you had to run an extension cord from your apartment to an adjoining building where a friend lived to keep your electricity working.

You probably don’t remember that interview. It was a long time ago. Now you are in that exclusive section of heaven God reserved for Detroit jazz musicians jamming with your running buddies Teddy Harris, Roy Brooks and Harold McKinney. I bet the jam session they organized to welcome you home was fantastic.

After our first interview, we became friends. I could always count on you for a good quote such as the one you gave me when I was working on an article about your close friend bar owner Bert Dearing Jr. You said: “Bert is like a Jew business man who loves jazz music and who knows how to make a buck.”

You never got upset when I’d call you on a Sunday morning out of the blue to chit-chat. There was one incident when you got upset with me.

It was three years ago when I quoted you in an article I had written about Roy Brooks. I won’t give any detail because I’m sure you forgot about it, but I have never really forgiven myself. Our friendship, however, changed.

Donald that incident was one of those moments I regret. I had plenty of chances to apology, but I didn’t. I hoped in some way you forgave me. For what it’s worth, my feelings for you never changed, not one bit. You were the jazz musicians that give me a start.
Posted by Charles L. Latimer at 2:37 PM 1 comment: 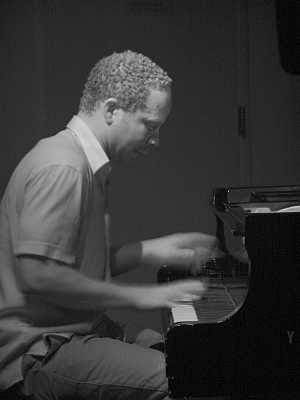 Last month, Craig, I wrote a blog about the influence James Carter's first album “JC on the Set” had on me, and how much I believed you and the saxophonist were compatible, noting there was a stretch where I listened to the album damn near every day for a solid year.

To this day, when I replay it I can’t just listen to it once then walk away. I have to replay it over and over. You are partially responsible for that.

Writing about the album, I didn’t convey you’re also responsible for some of my most cherished listening experiences.

The first experience that springs forth is your solo on “The Intimacy of My Woman’s Beautiful Eyes,” the third track on Carter’s third album “The Real Quietstorm”. Craig you had the piano serenading.

On your solo you express those feelings and emotions men harbor, but have a difficult time, for whatever reasons, conveying. Your fingers were like ten poets strolling along the piano keys. I would point to that moment if asked to name my favorite instrumental solo of all times.

The chemistry you and Carter delayed on his classic albums “Jurassic Classics,” “The Real Quietstorm,” and “Conversin’ with the Elders,” should be bottled and given to any budding musicians curious about how band members should inspire and complement each other.

I was upset when you and Carter slit. I wondered, particularly when I was reminiscing about the saxophonist’s music, how to musicians with so much in common decide it times separate. Did you guys just get sick of each other?

I kept abreast of James’ musical evolution, but at times I lost track of your career. I heard you moved to Brooklyn, New York, and signed with Thirsty Ear. You fatten your resume’ gigging with drummer Susie Ibarra, saxophonists Roscoe Mitchell, Chris Potter, and Lotte Anker.

I purchased a copy of your debut release for Thirsty Ear “Light Made Lighter". I wasn’t taken by it like I was with your first album as a leader titled “The Craig Taborn Trio,” which you made with members of Carter’s quartet drummer Tani Tabbal and bassist Jaribu Shahid.

In 2003, a few years, before the Harlequin Café, in Indian Village, closed down, I got a chance to hear you with guitarist A. Spencer Barefield’s group. None of the cats could match your creativity, but you shone nonetheless.

Seeing you at the Harlequin didn’t compare one bit to the first time I heard you live in 1997 with Carter in Ann Arbor, MI at Hill Auditorium. Carter’s quartet headlined the Blues, Roots, Honks, and Moans concert. That evening you had such a big sound I though you were playing two pianos simultaneously.

Last year, at the Festival of Jazz and Improvised Music, you performed with saxophonist Lotte Anker and drummer Gerald Cleaver. It was the last night of the two day fest, and the trio closed it out with a bang. I was there from sun up to sun down both days. I recall you guys getting the only standing ovation.

You did everything to the piano but crawl inside it. The image of you finger whirling on the keys like propellers stuck inside my head for months.

Although I don’t get a chance to hear you as often as I would like, I have those moments, images, and solos frozen in time inside of my memory.
Posted by Charles L. Latimer at 4:30 PM No comments: