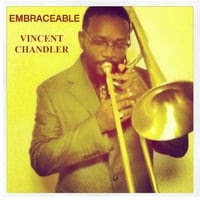 1.          Embraceable Vincent Chandler (Self-produced) Trombonist Vincent Chandler left Detroit this year to run the Jazz Studies department at Claflin University in Orangeburh, S.C. For Detroit, it was a big lost. Chandler was a top player and jazz educator on Detroit’s scene. Chandler left behind the city with an outstanding album titled “Embraceable”. The album, which features some of Detroit’s leading veterans and young players, was Chandler’s first full-length date as a session leader. Some years ago, he co-led two sessions with the great ensemble Urban Transport. “Embraceable is a gem and shows Chandler at the height of his virtuosity. Chandler composed all the tunes on the album.  The more you play this album the more you'll love it.

2.               Improvise Sean Jones (Mack Avenue Records) This is a milestone album for trumpeter Sean Jones, marking his tenth year on Mack Avenue Records. Jones was one of the company’s first stars, and he’s consistently put out great jazz music. “Improvise” is his best to date, and it can serve as sufficient proof that all the talk about Jones being the finest jazz trumpeter of his generation is correct. Jones could blow the heat off the sun. He pulled off this exceptional date with the assistance of some of his running buddy’s pianist Orrin Evans, bassist Luques Curtis and drummer Obed Calvarie.

3.              Afro Physicist Theo Croker (DDB Records)This is the jazz trumpeter’s first record on jazz vocalist Dee Dee Bridgewater’s record label, but it isn’t his first outing has a session leader. Suffice it to say, “Afro Physicist” certainly has all the energy and the work ethic of a debut. It’s Croker’s mission statement, and should solidify him as a major player in jazz. “Afro Physicist” is a melting pot of styles, the kind of jazz album that up-and-comers like Croker are making.

4.          Road Shows Volume 3 Sonny Rollins (Doxy Records) This is the best of the “Road Show” albums, which Rollins started releasing a few years back. It’s a live date, and Rollins is in top improvisational form. “Solo Sonny” demonstrates why he’s been the reigning king of improvisation for five decades.

5.         In My Solitude Branford Marsalis (Marsalis Music) Marsalis gave his working band the night off and performed this date solo. The album was recorded live at Grace Cathedral. A cathedral is a suitable venue to accommodate Marsalis’s massive tone. The saxophonist works out on a number of well-known standards. This album feels as if Marsalis invited a bunch of people to his house to experience one of his marathon practice sessions firsthand.

7.    Manhattan Stories Charles Lloyd (Resonance Records) A live two-disc recording that Lloyd made with guitarist Gabor Szabo, bassist Ron Carter, and drummer Peter La Roca Sims. It's Lloyd in his glory after he’d worked all that John Coltrane shit out of his system. Throughout Lloyd and Szabo sound like kindred spirits.

8.     Acacia Jesse Kramer (Self-produced) Kramer’s net worth is growing around the Detroit jazz scene. The youngster is in demand. And “Acacia,” his debut as a leader is the kind of hybrid jazz music he’s into currently. The music on the album isn’t straight ahead jazz, and most jazz purists wouldn't cotton to it. But, man does the music swing.

9.          The Art of Conversation Kenny Barron and Dave Holland (Impulse!) On paper, this pairing seems odd. Barron and Holland are from different points of the music. Barron is a post-bop apostle who has blessed every band he’s played in, and Dave is a central figure in both jazz fusion and free jazz. Putting them in the studio together seemed foolish, but somehow it worked. “The Art of Conversation” is one of the best jazz duo dates ever made. Barron and Holland wisely selected to perform music from their songbooks.

10.          Kayak Gary Schunk Trio featuring Peter Erskine (Detroit Music Factory) Pianist Gary Schunk knows how to make an old school jazz trio album, the variety that Oscar Peterson, Red Garland and Ray Brown used to make. Schunk was in a near fatal car accident and recovered in sufficient time to experience the success of this album, which to date is the best the upstart label Detroit Music Factory has put out. The ingredient that makes every cut on this album memorable is the superior drumming of Peter Erskine.
Posted by Charles L. Latimer at 1:29 PM No comments:

Jazz vocalist Dee Dee Bridgewater’s live shows can be R-rated at times, which her fan base enjoys because she is such a dynamic performer. Being over the top is part of her game. Friday night, at the Paradise Jazz Series in Detroit, She was tamed. She still put on a great show due largely to the young band she works with nowadays – trumpeter Theo Croker, pianist Michael King, saxophonist Irwin Hall, bassist Eric Wheeler and drummer Kassa Overall.

Croker is the band’s leader. Earlier this year, he put out a fine album titled “Afro Physicist,” which Bridgewater produced. Croker runs the band, but King is its workhorse and its star. As he proved during his soloing.

He’s a tasteful pianist who communes with the piano instead of banging it as if he's angry at it. Bridgewater seemed to be in heaven surrounded by all the testosterone.

She shared the bill with vocalist and guitarist Raul Midon, a one-man band. He can turn his voice into a brass instrument at will. During his set, it seemed as if an invisible trumpeter was on stage. He sang a handful of cuts from his current album. His set scored with the crowd. He loosened them up for Bridgewater.

Her set was tamed mostly. She did unlock her inner hoochie a few times, making sexual remarks about Eric Wheeler's big bass, and rubbing Midon’s inner thigh when he joined the band for “A Christmas Song”.

Her band stripped down and then applied new coats of varnish to Holiday’s “Lady Sings the Blues,” and “Fine and Mellow”. The band’s take of “God Bless the Child” was so touching it would’ve made Holiday weep in her grave.

The band segued nicely into a gang of Christmas songs after Bridgewater’s nod to Holiday.


Bridgewater was a bit nervous when Croker put her on the spot calling Donny Hathaway’s “This Christmas”. It was Bridgewater’s first time singing it. She sight read the lyrics and brought down the house in the process.
Posted by Charles L. Latimer at 2:51 PM No comments: