Mr. Moody-Sorry to hear the folks at the Detroit Music Hall for the Performing Arts cancelled your gig celebrating the 50th anniversary of the prestigious Monterey Jazz Festival. Man, I was looking forward to meeting you. I guess it wasn’t meant to be. I hope you will visit Detroit before you retire. I enjoyed interviewing you last month. I know it was only a 20 minute chat via cell-phone. For what it’s worth, it was one of my favorites. The article I wrote was slated to run in the Metrotimes, a weekly newspaper in Detroit, a few days before your scheduled gig, but when my editor got wind the gig was cancelled, he had no other recourse but to kill the article. Needless to say, I was thoroughly disappointed because it’s easy to brag to my friend that I actually interviewed a jazz icon when I have printed evidence. Mr. Moody, getting my hopes up about an article I wrote being published and for whatever reasons it getting cancelled is the part of being a freelancer that I hate. Anyway, I didn’t want the article to go to waste, so I decided to post it on my blog page with this hip photo a found of you on the web. I hope to meet you in the near future.
--Charles L. Latimer

“This experience playing the Monterey jazz fest is better than when I played in it with Dizzy Gillespie in 1960 because I’m learning so much from these young guys I’m playing with. I tell Benny Green and Terrence Blanchard that every night,” says saxophonist James Moody, 82, when asked how leading a super band for the Monterey Jazz Festival 50th Anniversary tour compares to the first time he played the festival 48 years ago.

It’s a Saturday afternoon, Moody is sitting in a crowded tour bus in the parking-lot of a Cracker Barrel Restaurant in Alabama talking to me via cell-phone about bits and pieces of his career, life lessons he learned from his mom, and the splendid time he’s having touring.

Moody’s wife Linda and his band-mates are eating lunch, but Moody remains on the bus. He jokingly says he refuses to eat in any restaurant with cracker in the title.

Moody is jovial and has a hunger to learn, emphasizing he’s always striving to improve. The saxophonist was born in Savannah, Georgia, but grew up in New Jersey.

“My mother always wanted to learn, learn, and I never went to school for music. I try to learn as much as I can because when you stop learning you are through, you know what I mean.”

Moody’s mom, Ruby, also introduced him to jazz. She favored music the big band music of Jimmie Lunceford and Count Basie. And she was an amateur pianist.
“Because of her my ears were educated, and I’m so thankful for that because if my mother was someone who liked Doo Wop, I would be singing that because you are what you listen to.”

Moody taught himself to play on a used tenor sax his uncle gave him. He played three years in the Air Force band. Then he joined trumpeter Dizzy Gillespie’s big band.

At the time, Gillespie’s band was loaded with would-be icons such as pianist Thelonious Monk, but Moody never felt intimidated or out of place. He stayed one year. In 1949, he recorded James Moody and His Bop Men, his first album.

Then he moved to Europe. There he recorded his first big hit “Moody Mood for Love”. Moody says the song is still popular.

“I still love doing it. I’m not doing it on the Monterey tour, but I do it with my quintet. When I do it now, I do a little rap thing at the end,” Moody says.

In 1963, Moody reunited with Dizzy Gillespie. He played off and on with the trumpeter for a decade before moving to Las Vegas. For seven year, Moody performed with the Hilton Orchestra backing Elvis Presley, Liberace, and Glen Campbell.

“I was playing my horn, but I wasn’t playing necessarily the music I wanted to play. But I was still learning, you know. It was a good lesson because I had to make a living, and I made a living for seven years doing that,” Moody says.

He returned to New York in 1981, picking up where he left off. He's been working exclusively as a jazz musician since. Moody made a slew of first rate jazz albums. In 1985 and 1990, he received Grammy nobs.
Moody’s last release was "Homage" four years ago. These days he tour eight months per year. Moody credits his longevity in the music biz to hanging with the younger players such as Blanchard and Green.

“That’s it man, if you hang around old people they be talking about this hurts and that hurts. I’m feeling okay. These younger musicians got the new stuff. So I’m trying to get some of that, man.”
Posted by Charles L. Latimer at 6:36 PM No comments:

Dobbins never attempts to outright emulate the original Jazz Messengers, although his group play compositions that were part of the Messengers repertoire. Dobbins named his band after the Messengers to pay homage to the late drummer Art Blakey, Dobbin's chief musical influence.

If Blakey were alive, and had attended The Modern Jazz Messengers’ performance Saturday night, he would’ve enjoyed every moment especially, how Pipho and Richko worked “Sky Dive,” “Bolivia,” and “Lester Left Town”. Pipho and Richko had the crowd transfixed. Pipho played notes faster than cars rolling off an assemble line. Richko woke up the blues monster in his piano on an impromptu belly rubbing blue number the group performed.

Dobbins joined the fray on Charlie Parker's "Donna Lee". Dobbins put his drum kit through a Taebo style workout, and the capacity crowd when nuts. At times, Dobbins can be a show-boater, but as a band leader the guy is charismatic and self-less. Saturday night, he had the crowd wrapped around his drumsticks, and instead of giving in to his proclivity to hog the spotlight Dobbins share it with his band-mates.
Posted by Charles L. Latimer at 4:29 PM No comments: 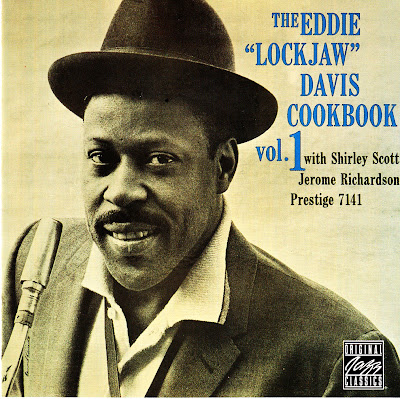 Last week, Lockjaw, I listened exclusively to The Eddie “Lockjaw” Davis Cookbook Volumes 1 and 2, and Smokin’, three classic albums you cut back to back in 1958 with organist Shirley Scott. You had a voluptuous tone. The notes you played seemed to come from the basement of your soul. I'll label what you did on those classics "soul-blowing". Is that an appropriate characterization? If asked to take the blindfold test jazz historian Leonard Feather started in Down Beat magazine, I could identify your sound from a crowd of tenor saxophonists. Your voice was that distinct.

That voluptuous tone and Scott’s gracefulness made for the prefect union. On the blues ballad “In The Kitchen,” I felt like I was peeping through the keyhole of your souls. You guys were musical soul-mates, indeed.

Is it true you fell for Scott’s immediately after hearing her perform at a little dive in Philly her hometown ? She impressed you with the support she gave her band-mates. When they stumbled, Scott guided them back on course.

Growing up in big bands led by such greats as Count Basie and Andy Kirk, you valued that kind of self-less attitude. That night you asked Scott to join your band. Did she accept right away? Did you have to get permission from her folks?

I bet a lot of jazz fans were upset when you guys split. Why did you and Scott quit making music together? Had the relationship run its course? Did Scott want to be a leader? When you decided to quit playing and became a booking agent, did Scott want you to reconsider? I understand for whatever reasons relationships change and people want to pursue other dreams. You and Scott moved on.

You made classics tenor sax battle albums with Johnny Griffin such as The Tenor Scene, Pisces, and Live at Minton’s. Those battles were brutal. How were you guys able to stay friends after blowing each other to bits on the bandstand?

Scott started her solo career in 1958, and made 42 albums including Queen of the Organ and Blue Seven. I hope before you split with Scott you told her what she meant to your band, and that she made those Prestige albums, especially Eddie “Lockjaw” Davis Cookbook Volume 1 gems.
Posted by Charles L. Latimer at 10:13 PM No comments:

VAL MADE ME BELIEVE 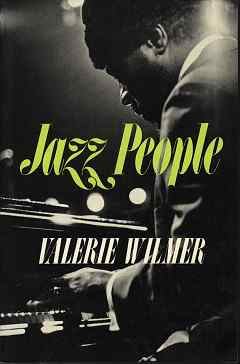 I’m asked often, Ms. Wilmer, to name the jazz journalist who influenced me. I always answer Valerie Wilmer. I read your book Jazz People religiously. Your sentences were music, and it revealed you cultivated a she’s-one-of-the-fellows trust with the musicians you interviewed.

As an admirer of you work, I’m ashamed to admit I’m not familiar with every inch of your life as I should be. I do know, however, you’re from England, you interviewed your first jazz musician, Herbie Lovelle, at 18, you’re an accomplished jazz photographer, and you also wrote As Serious As your Life, and Mama Said There’d Be Days Like This.

Last Thursday, I took the first step toward learning more about what made you tick as a jazz journalist. I ordered a copy of Mama Said There’d Be Days Like This. The book should arrive by the end of the month. I hope there’s a chapter or two about how you got the musicians to talk candidly.

Reading Jazz People--particularly the chapters on alto saxophonist Jackie McLean, drummer Billy Higgins, tenor saxophonist Eddie “Lockjaw” Davis, and vocalist Babs Gonzales—I felt as if they were sitting across from me at a neighborhood bar discussing their lives. Ms. Wilmer, you never came across as a critic or judgmental. You let the musicians explain themselves.

Billy Higgins described his style of playing as making love to the drums instead of attacking them. Ms. Wilmer you explored other angles, too. For example, you chartered Eddie “Lockjaw” Davis',” tenure as a booking agent. I bet most of his fans didn’t know he quit blowing to work as a booking agent.

You set the record straight in the chapter about alto saxophonist Jackie McLean's relationship with Charlie Parker. I got the impression McLean was never really aware he was copying Bird.

Ms. Wilmer, it saddens me you're not as popular among jazz enthusiasts as your peers Martin Williams, Amiri Baraka, Francis Davis, Nate Hentoff, AB Spellman, Gary Giddins, and Whitney Balliett. You were just as knowledgeable. I read there books and articles. Save for Balliett, they seem to only have a peripheral connection to the musicians they wrote about. The musicians you befriended valued you like a brother cherishes and respected his sister. For what it’s worth, you’re the one jazz writer who made me believe being a jazz journalist is a worthwhile occupation.
Posted by Charles L. Latimer at 7:17 PM No comments: