The Fred Hersch trio can play every popular form of jazz out there. Hersch, drummer Eric McPherson and bassist John Hebert proved that Thursday night at the Lydia Mendelssohn Theatre in Ann Arbor, MI.

The trio played music from Whirl, Alive At The Vanguard, and test-drove some new tunes that will be on an upcoming album. Hersch didn’t give the name of it or the release date.

The trio has a reputation for being imaginative, and daring with a blue-collar work mentality. McPherson was the only showman, showing on Sad Poet that he can navigate tempo changes without breaking a sweat. Hebert is a well-rounded ally the trio couldn't survive without.

The trio mixing Hersch’s tune Floating with Ornette Coleman’s Lonely Woman came across as a salute to free-jazz. It was a fist-pumping moment.

Hersch did some incredible things on the piano without being showy. He can swing from zero to 60 at will, but his God given gift is playing ballads.

The ballads the trio played last night, especially You the Night and the Music could’ve softened up the hardest death row inmates. The trio wasn’t big on frills but it put in an honest night’s work.
Posted by Charles L. Latimer at 3:10 PM No comments:

At the Dirty Dog Jazz Cafe Thursday evening, pianist Ian Finkelstein closed out a two night run with his new trio drummer Alex White and bassist Yosef Deas. The trio played a bunch of standards such as Body and Soul, In Walked Bud, and Sandu. Finkelstein put this trio together Tuesday, but they sounded as if they’ve played together for years.

Deas has the most mileage. During the early 2000’s, he was a key member of the then popular jazz group Urban Transport. And White is a promising drummer feeling his way around Detroit's jazz scene. When I heard him for the first time a few years back he was bombastic and flashy. He's matured into a serious drummer capable of powering a band.

Last night, White showed signs he’s become a tasteful drummer like Detroit drummers Djallo Djakate and the late Bert Myrick. There was a moment when White was playful. On New Dog, a Finkelstein original, White gave the melody a swift kick in the ass.

Finkelstein has grown into a marvelous jazz pianist, which isn't surprising. Pianists Tad Weed and Geri Allen were his mentors. At 23, Finkelstein seems comfortable and confident leading a band at a major jazz venue. He has great admiration for jazz standard compositions.

Besides, he knows how to update the standards without compromising their poignancy. Herbie Hancock is his main influence. Listening to Finkelstein play standards warmly and imaginatively made me wonder if Barry Harris and Billy Taylor were also influences.

All night long, Finkelstein conducted himself and the trio as if playing the Dirty Dog was major, which it is because only the top national and regional jazz musicians are booked there. Finkelstein’s trio could be one of the best in Michigan someday if he figures out how to keep the trio together.
Posted by Charles L. Latimer at 4:39 PM No comments: 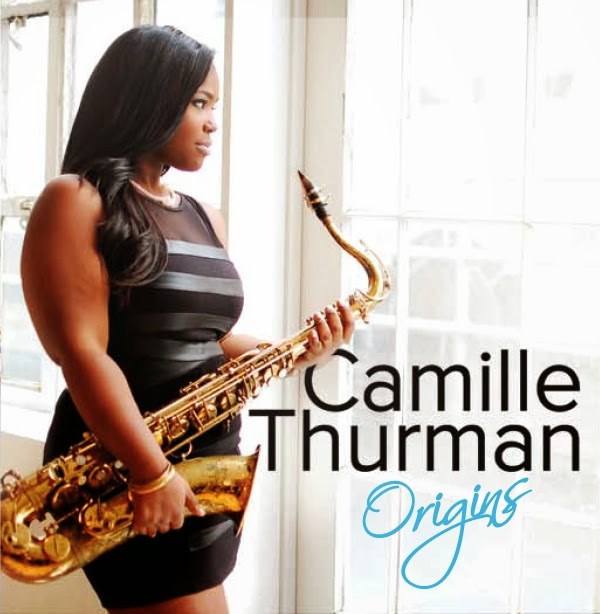 Camille Thurman is from St. Alban, New York. She has a degree in Geological and Environmental Sciences from Binghamton University. She plays the tenor sax, the alto sax, and the flute. Two years in a row, she won the ASCAP Foundation Young Jazz Composer Award. To date, Nicholas Payton, Dianne Reeves, Alicia Keys, Yolanda Adams and Terri Lyne Carrington are some of the stars Thurman has worked with. On February 4th, Hot Tone Music will release Thurman’s first album Origins. You couldn’t ask for a better debut. It shows all Thurman’s musical gifts. Of the 13 cuts she wrote 11. The lady can write, sing, and blow. I was drawn to the latter immediately. Her website doesn’t give her age. I suspect she’s in her twenties. But she has veteran chops. Her main influences appear to be the late tenor saxophonist Stanley Turrentine. Although, I’ll bet her rich tone and her zooming through the changes of Forward Motion, Indigo Moments, and Jitterbug Waltz, will earn her comparisons to saxophonist Tia Fuller. Origins is a pleasing first outing that could serve as Thurman’s musical mission statement.

Saxophonist Craig Handy’s Craig Handy & 2nd Line Smith is his first album in 14 years, and his first for Okeh. The album will be out January 21st. Mark that date on your calendar because this album is worth getting. It’s partly New Orleans line music and partly a tribute to the great jazz organist Jimmy Smith. All the tunes on the album are Smith’s. Handy loaded the album with star power. There’re guest spots from Wynton and Jason Marsalis, Herlin Riley, Dee Dee Bridgewater and Ali Jackson. What a marvelous group of jazz musicians to attend this block party. What propels the album is the excellent organ playing of Kyle Koehler, a native of Philadelphia, the city that gave us the great jazz organists Shirley Scott, Charles Earland and Don Patterson. After 14 years away from recording as a leader Handy’s studio work has no visible signs of rust. He's a storm trooper of a saxophonist. He’s always been. The crowd favorites here are Minor Chant and Ready ‘n’ Able, and Mojo Workin’.

Steep in mainstream jazz and in the avant-garde jazz drummer Matt Wilson is. He even fools around with pop from time to time. For his 11th album Gathering Call, you get to experience his diverse musical interests. Wilson plays some originals, music by Duke Ellington, Charles Rouse, plus the Beyoncé hit If I Were a Boy, which is one of the album’s standouts. Sometimes Wilson has worked with a piano-less band. His chops are so vast and he swings so volcanically chances are you won’t notice a piano is missing from the mix. For years, I believed a jazz band couldn’t swing without a pianist. That belief changed after listening to Wilson’s 2009 album That’s Gonna Leave a Mark. On Gathering Call coming out on Palmetto January 21, Wilson worked with his quartet -- saxophonist Jeff Lederer, bassist Chris Lightcap, and cornet player Kirk Knuffke (the quartet’s newest member – As a special feature Wilson hired the top-tier pianist John Medeski. And Wilson made go use of Medeski’s skills. He works well on some of the album’s more lightweight free-jazz cuts such as Some Assembly Required and How Ya going? Although he’s not on every cut Medeski's contribution is a big part of the album’s overall appeal.
Posted by Charles L. Latimer at 10:22 AM No comments:

“It’s cool in here. But, you know once Roy Hargrove starts playing the place is going to heat up,” said the man seated near me at the second concert of the Jazz at the Centre. The man was right. It was nippy inside the Paul Robeson Theatre at the Northwest Activities Center Saturday evening where Hargrove, 44, one of the leading trumpeters of the 90's generation, played a two-hour set with his quintet.

Hargrove is skilled at fusion, at neo-soul and at every form of bop under the sun. This concert was heavily post-bop with some funk stirred in. It took about four tunes for Hargrove to hit his stride, which was unusual. It was the fourth time I’ve caught one of Hargrove’s concerts in Detroit. Normally, he hits the stage swinging.

This time out, he started out flat, but when he finally got it together he was magnificent. I overheard someone say that Hargrove has had some health issues recently, and he takes dialysis regularly. That may explain his flat start.

Hargrove and Robinson shared the frontline with Robinson shouldering most of the workload until Hargrove hit his stride, which happened after he played the ballad You’re My Everything.

When Hargrove pulls out his flugelhorn bank on him playing a ballad that’ll make you feel mushy inside. The audience roared after Hargrove finished the ballad.

Then Hargrove surprised everybody when he sung Never Let Me Go. I never knew he could sing. After that number, Hargrove got a second wind. It’s easy to tell when the music is bubbling inside of him. After a solo, he moves behind the band and he dances about the stage.

Hargrove’s quintet is tight as new leather work boots. The quintet works in shifts. Robinson and Fortner carried the first half of the set, and Phillips and Saleem showed up big time the last half.

The most exciting number was Starsbourg/St. Denis from Hargrove'a 2008 album Earfood. On that cut, Fortner had the piano sinning while Robinson wolfed down the changes like cupcakes.

For my money, Fortner and Phillips were the standouts. Fortner is a  marksman. And Phillips is flashy but not an overpowering jazz drummer.

Hargrove and Robinson closed the concert by playing while walking through the audience.  A move favored by some smooth jazz musicians. The audience ate it up.

After they settled down, Hargrove spoke at length for the first time. He let on how much he loves playing in Detroit because Detroit is a serious music city. Then for an encore he played three more tunes.
Posted by Charles L. Latimer at 11:39 AM No comments: