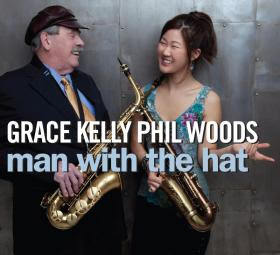 This is your sixth album. That’s a big deal given you’re still a teenager. I wonder if that’s a world record. I’ll have to investigate that. “Man with the Hat” is a solid addition to your growing discography , and I was taken by the album after the first listen. I’ve played it many times since. It says volumes about your talent that legendary saxophonist Phil Woods decided to co-lead this project, and the great pianist Monty Alexander participated as well.
Grace, you are a superb alto saxophonist and singer. You’re going to be a great jazz musician someday after you’ve had more life experiences. Right now, you have all the technical know how, but you’re still some years away from telling stories on your instrument. That will come with age and life experience. Some people familiar with your work have labeled you a musical prodigy. That’s false.
Such a label implies playing comes easily. Apparently, you've invested a lot of time listening to great alto saxophonists. Listening to “Man with the Hat”, I could tell you spent time honing and polishing your chops. I doubt if alto saxophonists Lee Konitz, who appeared on your fourth recording "Gracefullee" and Woods would’ve bothered with you if they didn’t believe you’re a dedicated musician.
Honestly, Grace, I’ve never been a big fan of Woods, especially after I read when Charlie Parker died Woods assumed his life. Woods inherited Parker's wife, his horn, and his sound. Chan Parker, who was married to Parker and Woods, wrote about it in her autobiography “My Life in E Flat”. That was a long time ago, and undoubtedly Woods has distinguished himself, and on this recording his chops are still in mint condition.
It was the grown folk’s material on “Man with the Hat” that held my attention “People Time”, “Ballad for Very Tired and Very Sad Lotus-Eater” and “Gone”. You delivered those songs with feeling, and you could’ve been easily mistaken for someone years older. You have a delicate singing voice.
On the up-tempo numbers, I had a hard time distinguishing between you and Woods. I mean that as a compliment. The standouts on “Man with the Hat” are “Gone” and your duet with bassist Evan Gregor on “Every Time We Say Goodbye” That was a nice moment, and it demonstrated the depth of your technical know how.
Posted by Charles L. Latimer at 2:28 PM No comments:

"Where’ve you been, man”?” I asked my friend Cory the barber. In the background, I heard saxophonist Cliff Jordan’s album “Cliff Craft” playing. This was the first time I talked to Cory since Christmas. I called to find out if he was okay.
“I’ve been dealing with some stuff. Be bop’s mother got a new job in Atlanta, which starts next month, and she planning to uproot my daughter.
“Atlanta is not a bad place to start over, and I hear they have a pretty good public school system.”
“Be bop, is all that I got in the world, man. I’m not going to allow her mom to take her away. I fought too hard to get partial custody“.
“I remember what you went through. I know you don’t want to relive that.”
“I’ll fight to keep my daughter here,” Cory said.
“You have to think about what’s best for her”.
“That’s easy for you to say. You don’t have kids”.
“That’s true but…”
“Look man, you didn’t call to hear me bitching and moaning about my personal problems”.
“You can’t keep that kind of stuff all bottled up inside you, man. It will drive you nuts”.
“I hear you. Change the subject. What have you been listening to”?
“All kinds of good stuff. Some of James Carter’s earlier recordings, the new album by the Yellow Jackets, and a date co-led by Phil Woods and Grace Kelly, a young alto saxophonist. She’s pretty good to only be 18-year-old”.
“Didn’t she make her first album when she was 12-year-old”?
“I believe so, but don’t quote me on it”. Her playing is still remedial. She’s a really good singer. She worth following. By the time, she hits her thirties, she’s going to be a household name. Is that Cliff Jordan you’re playing”?
“Yeah. I’ve been listening to it for a few days”.
“I’ve also been listening to Johnny Griffin’s album ‘A Blowing Session’ that I picked up at Borders.
“I have that album. The sidemen are Art Blakey, Wynton Kelly, Lee Morgan, John Coltrane and Hank Mobley.”
“That right”.
“But I thought given the talent pool on the album would’ve been more powerful like a cutting contest”.
“Now that I think about it the album wasn’t really a powerhouse”.
“Maybe because all the guys save for Art Blakey were still wet behind the ears at the time. They were outstanding players, but neither had really cemented their reputations. Coltrane was on the cusp, and Morgan was still sort of honing his sound”
“The album was still worthwhile. I think although it was pretty straight forward”.
“The albums Griffin made with Eddie “Lockjaw” Davis was better”.
“Those two cats were blowing their butts off, man.”
“That’s the kind of energy missing from ‘A Blowing Session’. Hold on for a second I have another call coming through.
The cell phones went dead. A few minutes later Cory came back online.
“It’s my daughter on the other line. I have to call you back later. I really need to talk to her. It was good talking to you. I was in the dumps, but I feel much better now”.
Posted by Charles L. Latimer at 1:03 PM No comments: