PEPPER GOT IT IN HIS SOUL

Is it a coincidence, Mr. Adams, all last week I listened to Pepper Adams Plays Charlie Mingus, Lee Morgan’s The Cooker, read a chapter in Al Young’s memoirs Body and Soul about hearing you at the World Stage in Detroit in 1955, and now I’m having a conversation with you at my favorite neighborhood record store Car City Records on Sunday? I discovered years ago, Sunday is the best day to shop here. It’s not crowded. Mr. Adams, I don’t make it a habit of approaching folks in public places, but it’s rare I encounter a hometown music legend.

I'm surprised you’re not combining through the jazz bins. I would’ve never thought you like R&B music, particularly John Legend. Are you thinking about buying Kenny “Baby face” Edmond’s greatest hits album, too? You should cop it. Edmond is an amazing songwriter.

I know you don’t have a lot of time to chat with me. I have to tell you how “Pepper Adams Plays Charlie Mingus” really captured how multi-faceted the bassist was. The Detroiters Hank and Thad Jones, Charles McPherson, and Paul Chambers helped you show Mingus was a swinger, a blues shouter, and a political activist in his own right.

Mingus helped you select the compositions for the date. Is that true? I heard the bassist was a stickler, and quick to chastise. What kind of relationship did you have with him? Did he ever single you out? Nicknamed “ the knife,” and being a Detroiter probably made Mingus think twice about bullying you. I heard the bassist had a love hate relationship with Detroit cats. A jazz friend told me Mingus said Detroiters were too heavily into bebop.

On I0 to 4 at the Five Spot, The Pepper Adams Quintet, and Encounter should prove you couldn’t be typecast as a Detroit bebopper. On Lee Morgan album The Cooker you stole the show. Allegedly you cut Coltrane to pieces on Dakar, an album released by Prestige Record considered a classic blowing session. You had something extra special. With that piercing, deep tone on the baritone sax, you cut everybody who challenged you. I bet that’s why bandleaders such as Mel Lewis, Benny Goodman, and Lee Morgan wanted you by their sides.

Mr. Adams, I respect your loyalty to other Detroit jazz musicians. On most of your albums you hired Detroiters. Some were your running buddies from the World Stage and the Bluebird Inn. You could have employed musicians from other cities, but you reached back. Detroit jazz musicians have an unbreakable fraternal loyalty.

Listening to “Pepper Adams Plays Mingus,” I imagined Mingus was sitting in the studio with his hand on his belly, his eyes closed, soaking up the music. You were cooking because throughout the session Mingus was patting his feet. Mingus got the holy spirit when you soloed on “Better Get It In Your Soul”. Okay, so it really didn’t happen that way. Remember, Mr. Adams, I’m just fantasizing.

I bet Mingus was happy with the outcome. I know I’ve talked you ear off. You probably want to get home and listening to that John Legend and Babyface album.
Posted by Charles L. Latimer at 5:30 PM No comments: 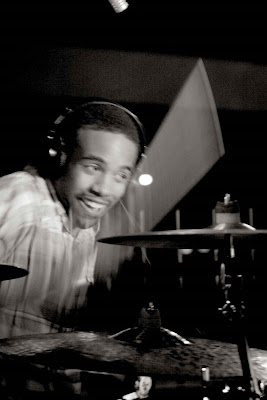 Last week, I posted my five favorite jazz albums (which included new releases and re-issues) I purchased in 2007. I wanted to list 50, but my dear buddy William, a certified jazz guru, encouraged me to reduce the list. Shaving it down to five, he said, required careful consideration. I chose the five albums I played over and over. Surprisingly, William did not criticize my list. Days after he read it, he asked me for the five best jazz gigs I attended last year. Choosing five albums was tough because I bought a bunch of wonderful albums. I decided to simplify the process this time. I chose the gigs that I still think about.

This was the last jazz concert I attended in 2007. Master drummer George Davidson-who I first heard in 1997 playing with the late pianist Teddy Harris at the Wednesday night jam session at Baker’s Keyboard Lounge-assembled four of the finest Detroit based drummers, Bert Myrick, Sean Dobbins, Bill Higgins, and Spider Webb( that’s not a pseudonym) and let them slug it out. When the smoke settled the drummers were slumped over their drum kits, and the capacity crowd was hurry for more blood.

2.) The Second Annual Festival of Jazz and Improvised Music??
(The Bohemian National Home)

Hey Joel, I have to be honest with you. I didn’t think it was musically possible to put together a music fest and there not be one bad performance. You made it work, man.

3.) The James Carter Quintet
(The Detroit Institute of the Arts)

On this night saxophonist James Carter horns were full of special effects. There’s never an uninteresting moment at Carter’s live performances. The saxophonist shows a lot of love to Detroit jazz musicians, too. He likes working with his hometown colleagues. At the DIA gig, Carter was flanked by two of Detroit's finest bassist Ralph Armstrong and trumpeter Dwight Adams.

The 23-year-old drummer was bassist Rodney Whitaker’s protege’. Rodney, you did a great job raising this kid. As a bandleader, Dixon is not a ball-hog. He proved it by sharing the spotlight with his band-mates pianist Mike Jellick, bassist Ben Williams, and saxophonist Diego Rivera. These young musicians are Detroit’ next generation of swingers.

At 82, Lateef showed no visible indications his chops have rusted. When he played the blues my ears were glued to his horn from start to finish.
Posted by Charles L. Latimer at 8:17 PM No comments: 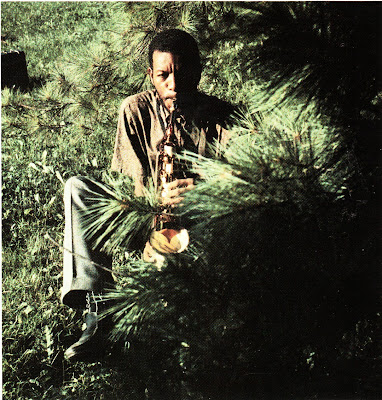 Mr. Coleman, did you like The Outsider, the article music journalist Scott Spencer wrote about your life in the December issue of Rolling Stone magazine? Spencer explained how you kept blowing despite the ugly things critics, club owners, and some of your peers said about your music. The article made me reminisce about who introduced me to your music. In 2004, I asked my buddy William, a red blooded jazz aficionado, questions about free-jazz. William suggested I check you out. Then he gave me a copy of Four Lives in the Be Bop Business by jazz historian A.B. Spellman. I learned a lot about you reading that book.

You grew up in Forth Worth, Texas. Rosa Coleman, your mom, encouraged you to play music. Flutist Prince Lasha and drummer Charlie Moffett were your childhood running buddies. Your high school music teacher booted you out the school’s band. He caught you teaching your band-mates jazz licks. I bet the music teacher never thought you would make over 50 albums, win a Pulitzer Prize, and receive the prestigious "genius grant" from the MacArthur Foundation.

Mr. Coleman, you never lost faith. I admire that. You had plenty of reasons to quit. I heard about the incident in Baton Rough, Louisiana when you worked in Clarence Samuel's rhythm and blues band. Angry patrons mangled your horn, and pummeled you because they hated your playing. After that incident, I would have changed careers. You kept blowing. Level with me, did you ever contemplate quitting?

“The Outsider” inspired me to re-listened to Something Else!!!, Tomorrow Is the Question, The Ornette Coleman Trio at the Golden Circle Stockholm Volume One, Change of the Century, New York Is Now, and Free Jazz a Collection of Improvisation. I had an issue with the latter. The playing was jumbled. Were you certain people would understand it? I asked my buddy, William, the same question, and he explained how you guys were feeding off each other.
Something Else!!! your first album for Contemporary Records is the album I listened to over and over when I finished Spencer's article. Mr. Coleman, Something Else!!! sparked a heated exchange between William and me. I told William Contemporary should have marketed it as a Be bop album. On the tunes Chippie and Invisible, for example, you played as if Charlie Parker was at the session coaching you, and throughout the recording Don Cherry sounded like Dizzy Gillespie. William disagreed.

“To you Something Else!!! sounds like Be bop because you're experiencing it 50 years after Coleman made it,” William said.

“If you were listening to it, for example, in ‘58 when Coleman made the album you would hear it differently, and appreciate what he was doing. He took what was essentially Be bop and reshaped it by doing something different with a song’s harmony and melody.” He called it harmoldic. Coleman didn’t want to be a slave to the conventional way chords were played. That’s how he approached things.

“Be bop is Be bop no matter what you call it or how you approach it, right?”

“No, because it sounds that way to you don’t mean that’s what he was playing. Coleman had essentially figured out a new way to improvise…”

“…That’s clear as day on Change of the Century and Tomorrow Is the Question. But Something Else is a Be Bop album. I'll go to my grave believing that."
"Chances are you'll be the only stiff there who believes Coleman was playing Be Bop. Your mind is made up. I don’t see the point in continuing this conversation.”

Mr. Coleman am I absolutely nuts for believing Something Else!!! wasn't a free-jazz album? I trust my ears.
I started by asking if you liked Scott Spencer’s article. But I ended up questioning you about a recording you made nearly 50 years ago. I hope I haven't offended you. Mr. Coleman “The Outsider” was a thoroughly written article that captured what you had to endure to become a music icon, and it got me excited about your music again.
Posted by Charles L. Latimer at 11:10 AM No comments: