The past five years, the Detroit Jazz Festival artist-in-residency has become a prestigious post. Regina Carter, Christian McBride, John Clayton, and Joshua Redman were big-name jazz musicians who held the residency. Metheny, however, is the most celebrated and accomplished.

Metheny is already a jazz legend. The man has made a whopping fifty plus albums, won 18 Grammies, and has been a principle influence of a legion of guitarists from various walks of music. I Dig Jazz wanted to get Metheny’s take on the Detroit Jazz Festival and a few of his fondest recollections of performing in Detroit.

When you're asked to be the 2015 Detroit Jazz Festival’s artist-in-residence, were you gung-ho about accepting the gig, or were there some reluctance?

I was pretty gung-ho. I have had a role like this many times over the years, but always outside of America. This is the first time I was asked to do anything like this here in the States.  Because Detroit is so special to me in so many ways, I was thrilled and honored to be asked.

How does the Detroit Jazz Festival stack up to other high-profile jazz festivals you have headlined?

I have been lucky to be able to travel so much over all these years, and I think I have played on just about every major jazz festival, many of them on multiple occasions. It has been really exciting to watch the Detroit festival emerge as one of the best festivals in the world, and one with a very unique vibe that could only happen in America, and in fact, only in Detroit.

This festival is distinctly different from all the European festivals, as great as they are. Because of Detroit’s particular place in American history and the amazing way that the city has been represented in music by the wide and deep array of musicians who have come from Detroit, there is an equal kind of wisdom and insight into the music to be found in Detroit audiences as well.

Add to that the excellent world-class programming that has become the hallmark of the festival in recent years and the truly stunning fact that the concerts are free to the public, and you find a festival that is unlike any other anywhere.

What's your fondest recollection of performing in Detroit?

I have so many great memories. From playing at the Punch and Judy theatre very early on (one of the first places to give me a gig as a leader actually) to the 80/81 band at Baker’s Keyboard Lounge to all those many hot and sweaty summer nights out at Meadowbrook with my own groups to playing with Joni Mitchell at Pine Knob to all the fantastic concert experiences downtown at the Fox, the State, Orchestra Hall, the Music Hall to live on DST and on and on. And as I have noted along the way, I have never had a bad gig in Detroit, the audiences are always inspiring and great to play for.

Are there any Detroit jazz musicians you’re dying to work with?

Ron Carter is at the top of the list. Although we have played together occasionally in various settings, playing a duet concert with him as we are doing is something very special. He is one of my real heroes in life.

If you’re going to be a spectator at this year’s jazz fest instead of its artist-in-residence, what performers would you be anxious to check out?

It is such an incredible line-up. I would definitely be there to hear James Blood Ulmer. It is great that my brother John Scofield is playing again with Joe Lovano for a tour. They are a classic combination. I have known Brian Blade since he came on the scene, and he has often spoken about how much of an influence my group was on his Fellowship Band and I would definitely go see them if I could.

I knew Carmen Lundy back in Florida when we were both starting, and I don’t think I have seen her since then - I would love to check out her set. Christian Scott is another younger musician I have followed from the beginning of his career and is a super talented musician with a real authentic voice. There is so much great music to be heard at this festival.
Posted by Charles L. Latimer at 8:16 PM No comments: 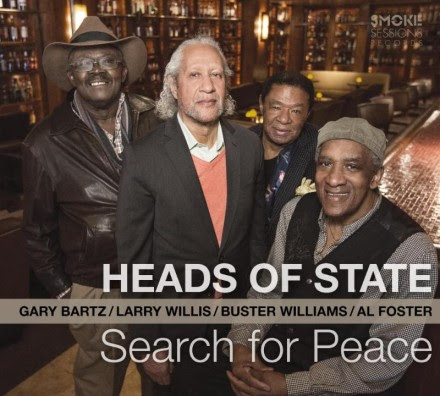 Heads Of State is a recently formed all-star jazz quartet. The members are saxophonist Gary Bartz, pianist Larry Willis, bassist Buster Williams and drummer Al Foster, four of the classiest jazz musicians working. They came together, as the story goes, last year for a one-time only engagement at New York’s Smoke Jazz & Supper Club. The evening was magical, and a week after that Willis pitched keeping the band together, which Williams, Bartz, and Foster were up for.

Initially, the quartet was billed the Larry Willis All-Stars, and the quartet's first high-profile gig was a three-day concert tribute to NEA Jazz Master McCoy Tyner. Some of the compositions performed at the tribute are on this album. The quartet’s name was changed to Heads OF State, and in January the quartet recorded Search for Peace, an excellent ego-less swing session, which Smoke Session Records released in July.

This quartet is tight as a banjo string. On Impressions, Uncle Bubba, Soulstice and I Wish I Knew, each member uncaged their inner-swinger. Heads Of States is a democracy. Each member is accomplished and influential. However, Bartz's chops power the quartet. His solo on Crazy She Calls Me has a celestial warmth. And on medium tempo selections there's a gentlemanly air to his blowing. 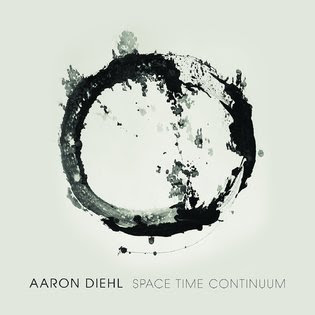 The nine original compositions Diel included on Space Time Continuum seem custom-tailored for his guests. Golson shows he still has genius level chops on the album’s best cut Organic Consequence. Temperley, a titan of the baritone sax, put a veteran swinger’s touch on The Steadfast Titan. Diehl is a jazz pianist who rarely color outside the lines, but what he does inside the lines is awesome.
Posted by Charles L. Latimer at 6:35 PM No comments: