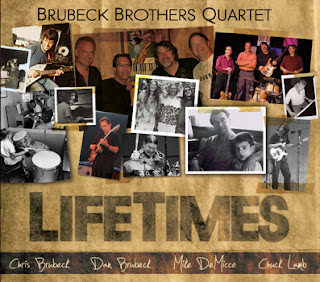 Mark Masters Ensemble, featuring Gary Smulyan
American Jazz Institute Presents Ellington Saxophone Encounters (Capri Records)
When bandleader and composer Mark Masters, who runs the American Jazz Institute, and his frequent collaborator baritone sax player Gary Smulyan bounced ideas off each other for a Duke Ellington tribute album they wanted to make, the two decided from the onset against making a predictable tribute album of well-known Ellington and Strayhorn favorites. The streets are over-populated with such albums. After considerable brainstorming, the two decided on a novel but risky idea. Make an album of songs composed by  some of Ellington's sidemen. Masters and Smulyan ran with it, and the outcome is a unique Ellington tribute. Honestly, the album is more of a salute to Ellington’s sideman than Ellington, which is perfectly cool. The album is due out the 21st of August. Masters and Smulyan picked one tune by Ben Webster, one by Jimmy Hamilton, one by Harry Carney, and one by Paul Gonsalves. There are two by Johnny Hodges. The album has plenty of  elegant swinging and some gutbucket wailing, too. Masters loaded his band with laureate caliber sax players such as Gene Cipriano, and Gary Foster.
The Brubeck Brothers Quartet
LifeTimes (Blue Forest Records)
The Brubeck Brothers Quartet, is run by Chris and Dan. They have put out four albums of mostly originals. It was only a matter of time before they cut one celebrating their famous dad jazz piano player Dave Brubeck. LifeTimes is the name of the album and it was released the 24th of July. Chris is a bass player and trombone player and Dan is a drummer and they have been playing together a lot since the 1970’s. On  LifeTimes, they scraped the rust off and remodeled four of their dad’s classics Jazzanians, Kathy’s Waltz, My One Bad Habit, The Duke, and Take Five. Chris and Dan grew up listening to their dad practice them with his band Paul Desmond, Eugene Wright and Joe Morcello. Desmond, wrote Take Five. It's the song most associated with Brubeck. Chris and Dan dropped a new engine in it and cruised the town.
Natalie Cressman
Unfolding (Self-produced)
Natalie Cressman is a jazz singer and at 20-year-old she’s under the legal drinking age and so are most of the members of her wonderful band Secret Garden. On August 10th Cressman’s first albums as a leader Unfolding comes out, and it’s the kind of eclectic album jazz musicians of her generation are making nowadays. Cressman sings in the vein of Esperanza Spalding and Gretchen Parlato. Like Spalding, Cressman is an instrumentalist, too. She plays the trombone impressively, but on Unfolding listeners will be swooned by Cressman’s voice. Cressman’s take of Charles Mingus’ Goodbye Pork Pie Hat calls to mind Joni Mitchell's version. The standout band-member is trumpeter Ivan Rosenberg. He’s an imaginative trumpeter, but not into grandstanding. Cressman gives the impression she wouldn’t stand for that. She’s no push over. Rosenberg is most comfortable shooting the breeze in the upper register of his trumpet. Cressman kept Unfolding in her generation, which was brave and was smart. Saxophone player Peter Apfelbaum was the only grown up  guest star she invited to her coming out party.
Posted by Charles L. Latimer at 10:11 PM