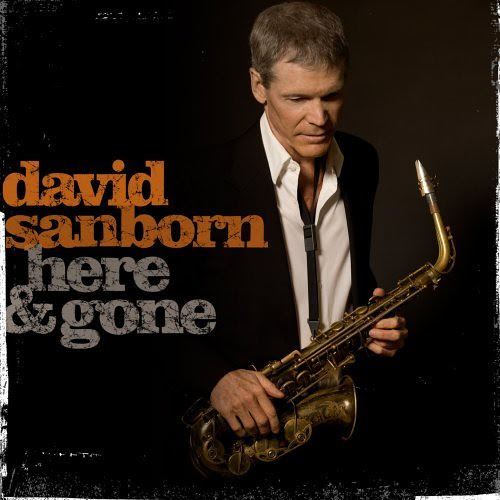 David, I want to chat with you about your new blues album Here & Gone, but first I need to vent. It upsets me when armchair jazz experts accuse you of ripping off alto saxophonist Hank Crawford. Its obvious Crawford influenced you. You always acknowledged that. Years ago, for instance, when Crawford appeared on your weekly television show Night Music you said the alto saxophonist helped shape the way you play, and you’re forever indebted to him.

David, I hate to play the race card. I wondered if those armchair experts singled you out because you’re Caucasian. Have you ever felt that way? I suspect you hate that like you loath being labeled a smooth jazz musician. I wonder if those armchair pundits are familiar with your background. Also if the people quick to criticize you know how many African-American musicians you helped get national exposure via your weekly television program Night Music. They probably wouldn’t be so judgmental if they knew how much time you dedicated to helping other musician.

As a lad, you had Polio. To speed up your recovery, your doctor suggested you learn the saxophone. Doing so would help the muscles damaged by the disease redevelop. You followed the doctor’s recommendation, and you got hooked. At 14, you worked with blues legends Albert King and Little Milton. That impressed me. I doubt King and Milton would’ve hired you if they weren’t confident you had talent.

I've heard African-American accuse Caucasian musicians of stealing their style. That’s bull. You guys, I believe, appreciate the music created by African-American, and have helped keep it alive. I wonder if African-American saxophonists who sound like Charlie Parker are subjected to the same scrutiny. They get thanked for carrying on Parker’s legacy while you guys get branded rip off artists.

David, now that I’ve vented, I want to talk about your new album Here & Gone. It’s a grand gesture of appreciation to every blues musicians who influenced you such as former employers Albert King and Little Minton. Both men would dig this album, and Hank Crawford would too.

David the collaborations on this session worked. Sometimes albums filled with collaborations are overwrought. The stars you selected, however, are versatile, and they complement you. On I’m Going to Move to the Outskirts of Town, Eric Clapton wailed and begged better than a seasoned panhandler.

Pop siren Joss Stone, On I Believe to My Soul voice aches with cries out like her sorority sister shipped town with her fiancée. You support and comfort her. David, you’re not a rip off artist. You’re a serious musician, and you keep making wonderful music.
Posted by Charles L. Latimer at 9:55 PM No comments: 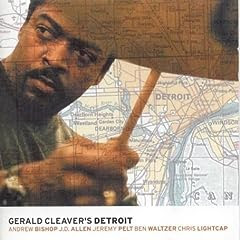 I just finished listening to your sophomore album Gerald Cleaver’s Detroit for the tenth time. I love the band’s work ethic and your leadership style. I especially like saxophonists Andrew Bishop and J.D. Allen. Bishop has been your running buddy for years, but where have you been hiding this Allen fellow. Man, he almost stole the show. He could’ve been easily mistaken as the session’s leader. I bet that would’ve upset you one bit. You never made a fuss about sharing the spotlight. Gerald I suspect you learned that from your dad John Cleaver. He's a no frills elegant drummer.

You’re not a showoff either. On the many albums you’ve graced, you seemed to have understood implicitly one of the drummer responsibilities is to do the band's dirty work. You’ve never through temper tantrums because you weren’t getting enough attention.

Backing vocalist Rene’ Marie and saxophonist Lotte Anker you were a gentleman. You never over powered them. You remind me of one of Blue Note Record’s great session drummer Joe Chambers. Gerald Cleaver’s Detroit is a love letter addressed to Detroit, your hometown. The guys you assembled share your blue collar work ethic. You gave each a chance to shine.

Trumpeter Jeremy Pelt and saxophonist J. D. Allen spoke their peace on Pilgrim’s Progress. Pianist Ben Waltzer and Andrew Bishop played tug-of-war on Grateful. And throughout bassist Chris Lightcap worked harder than a sharecropper. On Detroit (Keep It in Mind) the band engaged in a listenable collective improvisation. You all weren’t just in the studio making a lot of noise

Gerald I have to be straight with you, I liked this album more than your first, Adjust. I didn’t get what you tried to convey. It was too far out for my taste, but Gerald Cleaver’s Detroit I immediately fell head over heels for.
Posted by Charles L. Latimer at 5:59 PM 1 comment:

Bassist Ralph Armstrong tried damn hard to get the audience to buy into his comic shtick Thursday evening at the Music on the Plaza, a weekly concert series held on St. Clair Street in downtown Grosse Pointe, MI. As a sideman, Armstrong has worked with a bunch of prominent musicians such as saxophonist Eddie Harris, vocalist Aretha Franklin, soul crooner Curtis Mayfield, and pianist Herbie Hancock, just to list a few. For a number of years, Armstrong has been the workhorse in saxophonist James Carter’s quintet responsible for the bulk of the manual labor.

Thursday was the first time I experienced Armstrong as a bandleader. Watching him clown was tough because I genuinely admire him. He's a standout in a city top heavy with bass players. It's not uncommon, however, for a musician of Armstrong's caliber to have a bad night. Armstrong and his band faced a crowd that unfamiliar with his track record and who were obviously disinterested in his jokes. Most of the audience probably didn't have anything better to do, and felt it was too nice of a summer evening to waste at home watching sitcom reruns. Armstrong tried to perk up the crowd with some jokes when he should've just played.

Armstrong felt it necessary to prefaced each selection his quartet played with a corny joke. The jokes weren't remotely relevant to the compositions the band performed. For example, before they played Just Friends, the first song on their set list, Armstrong encouraged the crowd to continue to support the arts. Then he shamelessly quipped that if not for the arts instead of entertaining them he would probably be mugging them. The audience became so quite you could literally hear a cricket pissing on a piece of cotton.

He poke fun at the mayor of Detroit who the police arrested hours before Armstrong took the stage. I had an urge to heckled the bassist, but when the audience did not respond to his jokes, Armstrong and pianist Henry Gibson played a duet on Dear Old Stockholm. When they played the last note, I wanted to rush the stage and yell:"Yeah, Ralph that's what we came to hear!" Unfortunately, I never got the chance because the bassist told another lame joke about wanting to help the mayor pay his legal tab.

The bassist's jokes received a few chuckles. Overall, his shtick bombed. I mean really bombed. Most of the jokes were inappropriate. I wanted Armstrong to just play, but he stuck to his game plan.

Trumpeter Rayse Biggs clowned, too. On the Divorce Blues, Biggs played the trumpet and the flugelhorn simultaneously. The crowd went nuts. Then, for no apparent reason, the trumpeter literally started speaking in tongue. After biggs finished mumbling, I surveyed the audience for the their reactions. They looked outright confused.

I’ve experienced Armstrong at the top of his game on many occasions, and I think he’s a good reputable musician, but I can’t figure out why he behaved so foolishly.
Posted by Charles L. Latimer at 8:36 PM No comments:

A few weeks back, the folks at Mack Avenue Records sent me an advance copy of the Hot Club of Detroit new album Night Town, the follow up to the quintet’s 2006 highly touted self-titled debut. Evan, before I explain why I love this release so, I have a confession. Before Night Town hit record stores the editor of the Metrotimes, W. Kim Heron, asked me if I’d be interested in profiling your band. I turned the assignment down because I wasn’t familiar enough with the quintet’s material.

Evan, after listening to Night Town, I regretted not accepting the assignment because I’ve been unable to tear my ears always from the album. I wondered how the Hot Club of Detroit formed. I did some digging.

You master Reinhardt’s style. Then in 2003 you recruited saxophonist Carl Cafagna, accordionist Julien Labro, bassist Shannon Wade and guitarist Paul Brady, your classmates at Wayne State University. You taught them how to play Gypsy Swing. In 2006, the Hot Club of Detroit signed with Mack Ave Records. Since then, you guys have won a slew of awards.

Studying Reinhart’s music, you learned a drummer-less and a piano-less rhythm section could still swing hard. You wanted the Hot Club of Detroit to be unconventional not merely a carbon copy of Reinhart’s band.

Of the 15 selections on Night Town, four were Reinhardt’s. Evan, on this sophomore outing, the Hot Club of Detroit sung hard. Saxophonist Carl Cafagna and accordionist Julien had a grand time riffing and horsing around on the Blues Up and Down. Cafagna knows how to get to the point. And Julien Labro nickname ought to be the Bud Powell of the accordionist, the way he zipped up and down the chord changes.

Evan is it too premature to inquire about The Hot Club of Detroit’s next project. If welcome suggestions, I have one I think would excite Reinhardt if he was still alive. The quintet could tackle some Motown classic, and you could even tentatively title the project Gypsy Swingin’ in the Streets.