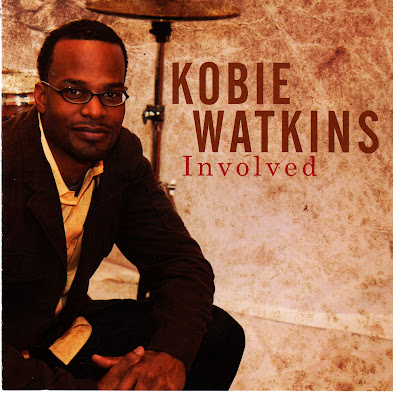 I promised Terri Hinte, the publicist who handled getting your album to the various media outlets, I’d listen to your new album “Involved” after receiving it months after the official released date. I try to review albums within days of their release dates. However, sometime things don’t happen as I plan. Anyway, I liked your album, and I think you’re a solid young drummer. I heard bits and pieces of the late great Max Roach in your playing. Did Roach influence you? ?

It’s obvious you invested many man-hours listening to the great jazz drummers. Although “Involved” is your album and you had the right to behave in any manner you deemed fit you opted to be an accompanist instead of a taskmaster. You gave the spotlight to your band-mates. I could count the number of solos you took on one hand. I want to commend you for being a selfless leader.

However, Kobie, I have a few issues about the overall feel of the album that I want to bring to your attention. I felt as if the album did not have a defined destination or theme, and you couldn’t decide what kind of jazz album you wanted to make.

In spots, “Involved” felt like a down home acoustic recording. There was times when the it felt too commercial. The album came across as if you wanted to please everybody. "involved"could have been nearly flawless if you had done some editing and pruning here and there.

I must note the album’s shortcomings weren't enough of a distraction for me to dismiss the album. There was more impressive playing than mishaps. For example, saxophonists Geof Bradfield and Jarrard Harris were strong. As they soloed, I thought about how swinger era saxophonists such as Benny Carter and Johnny Hodges sound could fill up a river.

As for your playing, you could've gone hog-wild with meaning and protracted solos,and behaving as if you had something to prove, but you are definitely to mature and refined a drummer and bandleader for such foolishness.You did not make a flawless album,which I am sure you're capable of, but you did make a listenable one.
Posted by Charles L. Latimer at 9:37 PM No comments: 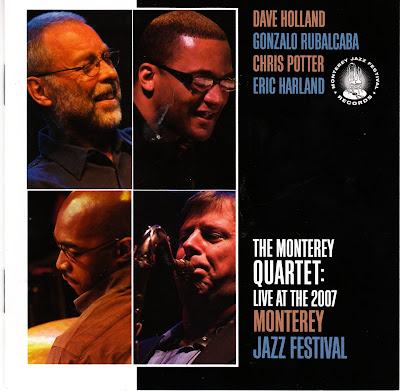 Normally, I wait until the end of the year to reveal my favorite jazz recording. We have less than four month left in this year, and I am confident this album will be number one on my list. I know three months earlier I announced drummer Jeff “Tain” Watts' album would be my favorite for ‘09.After I experienced “The Monterey Quartet: Live a the 2007 Monterey Jazz Festival, I had a change of heart, and Watts’ excellent album got bumped to number two, which is still pretty good given the album was released earlier this year, and I have listened two a ton of recordings
since.

“The Monterey Quartet: Live at the 2007 Monterey Jazz Festival could have been a disaster. Most all-star collaborations are, but bassist Dave Holland, saxophonist Chris Potter, drummer Eric Harland, and pianist Gonzalo Rubalcaba sounded as if they have been performing as a quartet for decades. They clicked on every level imaginable
I wondered if they had a pre-performance pep talk. There was no designated leader on this live session. Each musician contributed equally, and shared the same amount of soloing space. Any of the nine compositions could have been the crowd favorite. Mine was the Rubalcaba original “50”.
His solo was also my favorite, and I believe I set some official record for the number time I replayed the track. He embedded each chord he played into my conscious, and I found myself humming the song's melody at the oddest moment, once during my nightly meditation, and the following day at work during an important staff meeting.

This year saxophonist Chris Potter grabbed my attention, and I currently rank him as one of my favorite players. He possess the ability to sooth the musicians around him. Eric Harland carries himself like a world class accompanist concerned only with making his band-mates look good, which was Harland's biggest contribution. He swings at a medium volume, and you will never catch him grandstanding.
Dave Holland was the most experienced member of the quartet. However, he never once exerted his influence or attempted to baby his band-mates. He made sure they remained on track throughout, and he gave them the necessary support when needed.

One of the things that made “The Monterey Quartet: Live at the 2007 Monterey Jazz Festival such a good live album was the band was able to avoid the many pitfalls of an all-star session, treating the date like a free-for-all jam session. Henceforth,this album should serve as a template of how an all-star session such be.
Posted by Charles L. Latimer at 8:46 PM No comments: 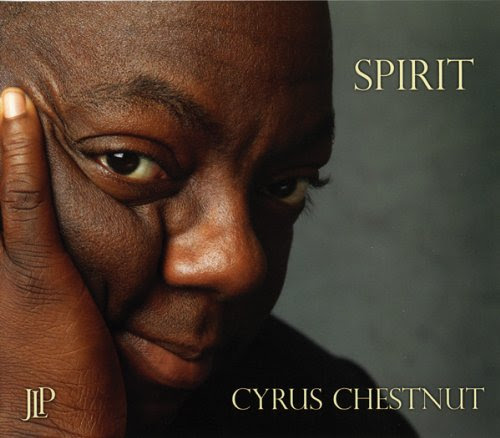 I still yearn for the old days, Cyrus, although I admire your new solo album “Spirit”. I admit I grew accustom to you as a swinger. I’ve expressed to you before how much I love your earlier albums you made for Atlantic Records years before they closed their jazz division. After experiencing “Revelation” and the “The Dark before the Dawn”, I became a devout fan, and I introduce my friends to your work. Musically you could do no wrong.

Two years ago, however, I did something I never imagine I would do. I trashed your albums “Genuine Chestnut” and “Cyrus Chestnut Plays Elvis”. The latter recording I genuinely hated. I wondered why you bothered to make such an album. Did you set out to establish a connection between jazz and the kind of pop music Presley made? I consulted some friends, but they could not help. They enjoyed the album.

With your new album, it appears you are trying to find your way back to the Cyrus Chestnut of old. Honestly, although “Spirit” is a sound date, which I would recommend, it doesn’t compare to some of your other albums.I wondered if “Spirit” would have been a great album instead of just a good one if you’d written more original gospel songs such as “Gospel Improv #1”, which is the best selection on the album.

“Spirit” show is you’re still a virtuoso jazz pianist, especially on selections such as “Lift Every Voice and Sing” and “Oh How I Love Jesus”. Although I occasionally questioned your motives, I never thought your skills were slipping.

I like your improvisation on “I Surrender All” and “Old Time Religion”. You strayed from the manner in which these staples were intended to be performed, but you didn’t get too carried away. It was creative how you literally transformed “Come Sunday” into a blues tune. No pun intended, on this album, you played as if the spirit hit you throughout this the album.
Posted by Charles L. Latimer at 9:15 PM No comments:

I've spent more time with your latest album “A Gentle Man” than I’ve with any album I’ve received this year perhaps for all the wrong reasons. I’ve admired your work since experiencing your debut album “Preacher Man”. You sound begged comparison to trumpeters Lester Bowie and Harry “Sweets” Edison.

After I listened to “Preacher Man”, I lost track of your career. I figured you were booted from the record label like other jazz musicians during the early 2000's when record companies closed their jazz divisions, leaving many jazz musicians established and up-and-coming in the lurches.

I received “A Gentle Man” last month I listened to it right away. Lately, I received a ton of mediocre album by trumpeters, and I hoped your album would offer a welcomed change. I have to level with you. I dislike “A Gentle Man”. I listened to it repeatedly for weeks because I wanted to like it. Last week I gave up, deciding to go with my initial feelings.
Rob, honestly, I even contemplated not commenting on “A Gentle Man” because it’s always painful for me to trash the work of jazz musicians I admire. Ignoring the album, however, would’ve been unfair and unprofessional. The publicists that send me albums to review on this blog trust I will do so without bias.
I enjoyed “Honeysuckle Rose”, “A Gentle Man” and the “Look of Love”. The other selections were okay at best. The entire album was placid. Maybe “A Gentle Man” would have been a better offering if you had included some original material. I’ve heard standards you included such as “When I Fall in Love” and “Sunny Side of the Street” more time than I’d care to remember. You did not do anything interesting with the standards, which happened to be your most discernible offense.
Frankly, Rod, you made an album I heard many times. Given your talent, you underperformed big time. Not putting your best foot forward, in my book, is an unforgivable offense. Rod, I hope that you take my comments to heart, and on your next album, you will be more original, and challenge yourself by composing original music, relying less on standards that have been played and reworked over and over
Posted by Charles L. Latimer at 2:52 PM No comments: