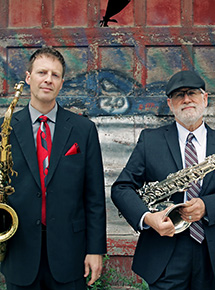 Saxophonists Steve Woods and Carl Cafagna have been mainstays on Detroit’s jazz scene for decades. Cafagna made a bulletproof reputation for himself as a key member of the wildly popular gypsy jazz group the Hot Club of Detroit, and Woods crafted a sound on tenor that calls to mind the era of bop greats Dexter Gordon, Eddie “Lockjaw” Davis, and Coleman Hawkins. About a decade back, Woods and Cafagna formed the duo known as the Detroit Tenors and have performed off and on since. The duo’s growing fanbase wondered when they’d record an album. Last month, the duo released the self-titled “Detroit Tenors” on the Detroit Music Factory label. Finally, a document exists of what a terrific team Woods and Cafagna are. They put their signature touches on 12 beloved standards. The recording is fire from top to bottom, embodying the fervor created decades ago on landmark recordings by tenor duos such as Coleman Hawkins and Ben Webster, Sonny Stitt and Gene Ammons, Dexter Gordon and Johnny Griffin and in recent times Eric Alexander and Vincent Herring. The cut on “Detroit Tenors” likely to get played repeatedly is the duo’s rendering of “Blues Up and Down”. 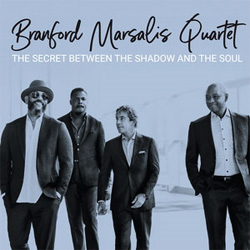 The Branford Marsalis Quartet has been together for over 20 years with only one recent personnel change. The hiring of the outstanding drummer Jason Faulkner who replaced the quartet’s longtime drummer Jeff “Tain” Watts. Watts was a driving force no doubt, but the quartet never lost any of its muscle when Watts split. Evidence of that is two outstanding albums the quartet made “Four MFs Playing Tunes,” and “The Secret Between the Shadow And The Soul. “The latter recently out nationwide on Marsalis Music/ OKeh. I concur with those who proclaim “The Secret Between The Shadow And The Soul” to be the quartet’s best album to date. The album straddles the fence of free jazz. It’s public knowledge the quartet can go both ways. Anyway, there are only seven tracks here. Save for “Snake Hip Waltz,” composed by pianist Andrew Hill, and “The Windup” by Keith Jarrett, the other cuts are originals by members of the quartet. Each cut could be regarded as the standout. And from start to the album’s conclusion the quartet is in lockstep. Amazing how Marsalis, Revis, Faulkner and Calderazzo can read each other’s thoughts. Reckon that’s the result of 20-plus years of swinging together.

Jazz drummer Ralph Peterson is a former Jazz Messenger, the musical institution co-founded by the legendary jazz drummer Art Blakey, and which over the years produced many of the jazz world’s leading bandleaders and soloists. Peterson perhaps more than any ex-member has continued Blakey’s legacy through his playing – true after all these years Peterson still sounds at times like Blakey did during his prime – and his past mentoring of current jazz stars such as trumpeter Sean Jones and saxophonist Tia Fuller, both respected and accomplished bandleaders. The past two months Peterson has been touring the states with ex-Messengers, Bobby Watkins, Geoff Keezer, Brian Lynch, Billy Pierce, and Essiet Essiet, promoting the new live double-disk album “Legacy Alive Vol. 6 at the Side Door.” There’s not much you can comment about this all-star band that has already been documented. So far “Legacy Alive” is the best album I have spent time with. It seems as if Blakey’s ghost was present for every tune chosen for this terrific tribute to the institution Blakey hand-built brick by brick. Warning this recording is so hard-driving it may damage the listener’s eardrums. The finesse and fire that each member developed while in Blakey’s employ remains in tow.

Sunday afternoon at Orchestra Hall in midtown Detroit the Paradise Jazz Series wrapped up its 2018-2019 jazz season with, in my estimation, the best concert in recent memory. The concert best described as a two-hour extravaganza captained by Grammy-winning trumpeter Terence Blanchard, featuring music Blanchard scored for Spike Lee’s films “Jungle Fever,” “Malcolm X,” “Clockers” “25th Hour, “Miracle at St. Anna,” “When the Levees Broke,” and “BlacKKKlansman.  Blanchard was backed by the Detroit Symphony Orchestra conducted by Damon Gupton and Blanchard's group the E-Collective with special guest vocalists Quiana Lynell and Ledisi. The concert started with two cuts from “Jungle Fever” “Make Sure You’re Sure, "which featured Lynell, and “These Three Words,” which featured Ledisi. Her version would have given its author Stevie Wonder goosebumps. Inarguably, Lynell and Ledisi who is more of a household name in neo-soul and R&B circles were the showstoppers the first half of the concert. Ledisi possesses the kind of vocal range that would fit comfortably in any genre she desires to undertake. And Lynell from the initial note she belted Sunday afternoon proved she was born to sing jazz. Don’t be surprised if decades from now she’s discussed with the same reverence greats such as Ella Fitzgerald and Sarah Vaughn are talked about. Takes a lot of talent to win over Detroit’s discriminating jazz fans. Lynell had the goods. There was plenty of awe-inspired moments attendees won’t forget anytime soon. The vocalists garnered the most ovations. In fact, I don’t have enough fingers or toes to count the total ovations. The vocalists singing was so touching and stirring it would’ve made the toughest critics weep. Lynell is a newcomer to the jazz fans who frequent the Paradise Jazz Series, but she won them over with an angelic voice the covered you like a warm sweater. The first have of the concert was dominated by Lynell and Ledisi, and the concert could have ended there with the audience confident they received their money’s worth. The second half of the concert, however, the emphasis was on Blanchard and the DSO. The most breathtaking moments were them pouring their souls into “Levees,” “Funeral Dirge,” and “Dear Mom” music from Lee’s documentary “When the Levees Broke.” I’ll bet a week’s salary there wasn’t a dry eye in the building at the completion of those compositions. And Blanchard offered the finest trumpeting I ever experienced from him in the many years I’ve been a fan of his work, and the numerous times he’s performed in Detroit.  He seemed to have channeled the spirit and pain of every individual affected by Hurricane Katrina. This was a meticulously executed performance that on the surface seemed overblown with the inclusion of a symphony orchestra and Blanchard’s group, but all the parts snapped together nicely with Blanchard captaining the ship. What a terrific way to end a stellar season of jazz music.