Claudio, we've never met. Allow me to introduce myself. I'm Charles L. Latimer, the brains behind this jazz blog. I'll try to be brief. A few weeks ago, a publicist from DL Media sent me your new album "Simpatico". I'm glad they did. I had a ball listening to it. In fact, I'm playing the alubm right now. The band has just wrapped up "Alberto and Daisy" one of the catchier cuts on the recording. Guitarist Romero Lubambo solo made my ears dance. You assembled a slamming sextet. I have to level with you, Claudio. "Simpatico" was the first time I heard you play. The album’s press release stated you're a master arranger and gifted trumpeter. After I’d finished my second helping of the album, I knew that wasn’t fluff. Throughout, you handled yourself like a master musician. Last year, you received a Grammy nod. I'm sure it was well deserved. (I wouldn't be surprised if the academy nominated "Simpatico" this year.) Right away, I could tell you worked with the musicians on this date for a long time. The camaraderie was as visible as a stop sign. Claudio, the album had only one flaw.The string instruments on the ballad "Slow Fire" was excessive. The strings disrupted your solo. The ballad would've been fine with just you pianist Helio Alves, bassist John Lee, and drummer Duduka da Fonseca. “Simpatico” appeared to be a Brazilian jazz album on the surface, but it's actually a straight up acoustic jazz date. It was nifty how the band tossed the melody back and forth on "Blues for Ronni” like a volleyball. "Piccolo Blues" was my favorite cut. I heard the Piccolo is a tiny trumpeter-smaller than the pocket-and difficult to play. According to the press release, you don’t play that horn often. You would have a tough time convincing the most astute jazz fan of that. I thought you invented the darn thing. You sounded that good playing it. I bet you could make a garden hose sound like an instrument. Let me stop. I could boast about this album endlessly, but I promised to be brief. As I mentioned earlier, I'm still playing the album. Right now, Fonseca drum solo on "Slammin" is begging for my undivided attention.
Posted by Charles L. Latimer at 6:41 PM No comments: 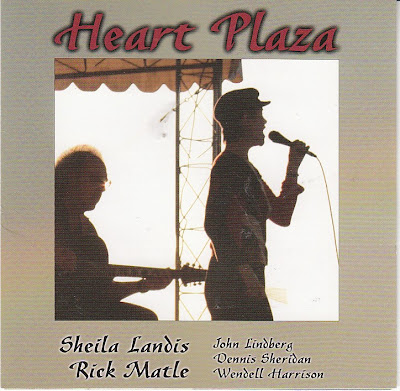 I couldn’t tear my ears away from your new album "Heart Plaza". Sheila,I was crazy about it after the first listen. I felt as if I was spellbound by a great poet. I've admired you for many years. I consider you one of the top jazz vocalists working. Sheila, on "Heart Plaza," you took risks, and you succeeded. You sung poems written by some of your favorite poets, and keeping the arrangements simple was smart.

The tricks you did with your voice was cool. On "My Heart Goes Out," for example, transforming your voice into a trombone was slick. I wonder how many jazz vocalists can make their voice sound like a muted trumpet at will like you managed to do on "Bag Lady". "The "Duke, your homage to the great bandleader and composer Duke Ellington, would have made him blush if he were alive to hear it.

You have the perfect musical companion in guitarist Rick Matle, who's soulful, white-collar guitarist. Matle is a sensitive accompanist, and he deserves recognition. The man is just as good as his peers guitarists Pat Metheny, and Bill Frisell. On "Trampled Heart," his playing melted on your voice like butter over hot cakes.

Sheila, I receive albums from jazz vocalists all the time. Most are the same. The vocalists seem afraid to venture. They only offer albums loaded with familiar oldies. I don't understand their reluctance to perform new material. You aren't afraid to shake things up, and I commend you for that. Sheila,"Heart Plaza is a wonderful spoken word jazz album.
Posted by Charles L. Latimer at 12:43 PM No comments:

KEY TO THE CITY

I'm not much for making predictions, Christian. I feel confident, however, making one that I'm sure other jazz fans would agree with. When the new jazz history books are written, about the accomplished musicians of your generation, you will be talked about not only as a first-rate bassist but also a gifted composer. I will bet money on that. At the halfway mark of your career, you're writing compositions and suites that are just as good as those written by Oliver Nelson, Horace Silver, Wayne Shorter and Duke Ellington. Christian, I dogged "Kind of Brown," your debut album for Mack Avenue Records. I'm not trying to make amends by comparing you to those great jazz composers.

Sunday, evening, I attended the concert The Movement Revisited: A Jazz Opus at Second Ebenezer Church. And like the majority of the capacity crowd, I was blown away. The suite you composed with the help of recording artist and record producer J.D. Steele commemorating the legacy of Rosa Parks, Malcolm X, Martin Luther King Jr. and Muhammad Ali was remarkable. I don't know if I was stricken with the Holy Ghost because I haven't been to church in three decades, and I wouldn't recognize the Holy Spirit if it whacked me upside the head. All I know was during the second and third movement I felt a strong urge to dance up and down the isle flailing my arms, but I managed to contain my composure. I didn't want to embarrass myself.

Anyway, Christian you did a fine job and your working band Inside Straight blended perfectly with the Majestic Voices choir. I set next to your pal Terri Pontremoli, the director of the Detroit International Jazz Festival. When vibe player Warren Wolf soloed, Pontremoli grabbed my lleft arm and said: That guy is a monster. I agreed unequivocally. And the same should be said about saxophonist Ron Blake, who in my humble opinion is the best saxophonist on earth. Blake has the complete package. The crowd cheered after his solos like they were inside a jazz club instead of a church.

Christian, I wasn't going to mention the concert started almost 45 minutes late. However, it wouldn't be right commenting only on what I enjoyed, and ignoring what annoyed me. Bishop Edgar L. Vann II, ticked me off delaying the concert while his ushers passed around collection plates. Hitting people up for a donation at a free concert was tacky. Walking to my assigned seat, I wondered what the gold buckets hanging on the benches were for. They looked like Kentucky Fried Chicken buckets dipped in gold. Later, I discovered the buckets were the collection plates. Christian, I wondered if Vann II was joking when he said the preacher has to get his money first, or if he was serious.

Once I thought about becoming a Christian, but I decided not to. It cost too much. I can't afford to fork over 10% of my earnings. I wonder if nowadays, if you have to have a certain credit score to join a church. There's this palatial church in Southfield, MI that will not baptize you if your credit score is under 700. Christian, I'm probably bound for hell criticizing Vann II. I accept my fate. I hear there are better jazz clubs in Hell. Vann II, on a positive note, did a great job of portraying Dr. Martin Luther King Jr. In fact, he was the best of the four narrators. The cat that portrayed Malcolm X was miscast. The narration was overkill. Without it the performance still would've been powerful.

Christian, at some point, you should be given a key to the city of Detroit. Whenever, you come here, you bring something wonderful. In 2008, you did a fabulous job as the Artist in Residence for the Detroit jazz fest. The following year, you unveiled your knew band Inside Straight, and became one of the most accomplished musician and bandleader signed to Mack Avenue Records. I anxious to see what you have in store for us the next time you come to Detroit.
Posted by Charles L. Latimer at 10:29 AM 5 comments:

It's been a long time since I've heard a real acoustic jazz album. I figured in this day and age it's impossible to make one. Antonio, with the release of your new album "Lagos Blues" you proved making an authentic acoustic jazz album is feasible and enjoyable as well. DL Media-the company that handles PR for the record label you're signed to-sent me this album last month. I liked the album right away, and I planned to review it. But, I got sidetracked. Paul Sipio of DL Media emailed me a few days ago wanting to know if I'd listened to your album, and if I planned to comment about it. Yesterday, I finally found the time to give the album my undivided attention. "Lagos Blues" is a wonderful album. It was clever using two tenor saxophonists Steve Grossman, who captured the public eye playing with trumpeter Miles Davis. Grossman is at top form on your album. He still has a rich and voluptuous sound. Stacy Dillard is impressive as well. If you hadn't already put him on the payroll permanently, you should because to the man can blow. Your album probably wouldn't be as good as it is without his contribution. So rewarding him with full-time employment status is reasonable and deserved. Actually, Dillard sounds as if he studied with Grossman for years. Like Grossman Dillard's tone is massive. And he knows a thing or two about playing a ballad. I salute you for not being over-protective with your sidemen, and giving each room to stretch out. Not many bandleaders would be okay with their sidemen outshining them. I don't have a favorite track. I enjoyed each tune you chose for the album equally, particularly when you soloed on "Reflections In D/Sentimental Mood. It was tender and it sounded as if your fingers were crying as they glided across the piano keys. Antonio, "Lagos Blues" is the first real jazz album that I"ve listened to in a long time.
Posted by Charles L. Latimer at 5:01 PM No comments: