"Come Fly with Me”, “One Mint Julep”, “Sweet Georgia Brown” and “Body and Soul”. We’ve heard those old world standards before, right? But never the way pianist Monty Alexander handles them on his debut recording for the indie label Jazz Legacy Production.  Music producer John Lee and the pianist handpicked the tunes from some of his recorded live performances.  It's hard to discern "Uplift" is a cut and splice project. Alexander--the mirror image of the late be bop laureate Bud Powell--rejuvenates those timeless gems. Alexander has the disposition of a saloon pianist--in keeping with how he's defined his style the past four decades--on the disc’s shortest tune “Home”.  He blends Calypso and be bop on “Fungh Mama”. Drummer Herlin Riley is a big part of this disc. Long ago, Riley earned his journeyman credentials steering the prestigious Jazz at Lincoln Center Orchestra. Throughout the recording, Riley is on Alexander's tail like a highway patrol car. 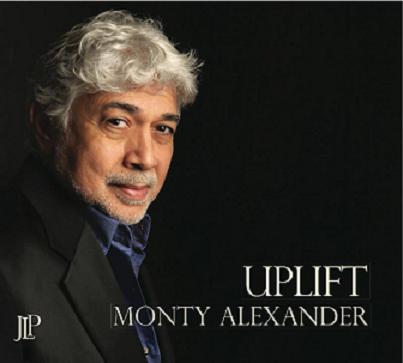 Posted by Charles L. Latimer at 9:27 AM No comments:

I will keep it short. Tenor saxophonist Steve Cole's new disc “Moonlight” (artistry music) is just as good as “Charlie Parker with Strings” and "Charles McPherson with Strings a Tribute to Charlie Parker". Some be bop savvy folks may consider that statement laughable because  Cole is a smooth jazz figure. Who cares what branch of jazz he favors? The man has an elegant set of chops and they blend nicely with the Millennium Chamber Players of Chicago. “Moonlight” is an attractive recording and Cole spruces up some familiar goodies such as “Cry Me a River” and “The Look of Love”.

I have to level with you, Robert. I disliked your two hour set last night at the Jazz Café.  It seemed as though you were winging it the entire night. You came to without a game plan. Yes, there were a few noteworthy moments.
Bassist Derrick Hodge’s slick soloing was one. Your James P. Johnson-like licks on the last tune was another. Your comic bit with Hodge was amusing. The college kids-which seems to be your target audience-had a ball, but some of the old-timers with a discerning ear for jazz became restless as the music dragged on without a clear destination.
Posted by Charles L. Latimer at 2:04 PM No comments:

I have gone over “Timeline” with a fine tooth comb. Nothing is wrong with it. How did you all make a flawless album without compromising the band’s taste? Was drummer Will Kennedy’s participation key? The group has always successfully mixed musical genres. Each member is a card-carrying jazz disciple at heart. Or, did you all want the group's first outing for Mack Avenue Records to be unforgettable? The bands jazz roots are intact and on full display from start to finish here. I am partial to the up-tempo cuts such as “Why Is It” and “Tenacity”. Both embodies a smooth jazz glow. Saxophonist Bob Minzter snowplows through the songs while pianist Russell Ferrante brings up the rear, tossing notes around like rock salt on a slippery surface. The slow tempo material such as “A Single Step” and “My Soliloquy” are intended for grown folks ears. The title track “Timeline” captures the Yellow Jackets' go-for-broke mindset. The key is special guest guitarist Robben Ford. He strums as though he has sin in his fingers. Fellows, this recording is perfect and a fitting celebration of the Yellow Jackets’ thirty years of service in the music biz.
Posted by Charles L. Latimer at 8:53 PM No comments:

I dreamt about you last night. This morning after I ate breakfast and read my emails, I played “A Monk and A Mingus Among Us,” my favorite Donald Walden album. It’s playing as I write this. In the dream, we discussed music in your living room. The scene was similar to the very first time I interviewed you in 1996, a few months after Arts Midwest named you a jazz master. You took the honor in stride. You claimed other musicians such as your teacher Barry Harris deserved the recognition more. You were being too modest.
We talked about Harris being a taskmaster. You also revealed once you quit playing and sold your sax. Work for jazz musicians was scarce. You took a job delivering milk. I always considered you a hipster. I found it unbelievable you used to be a milk man. Thankfully, the job was short lived and you resumed playing.
In the dream, we sat on a black leather sectional sofa. You were dressed impeccably in a gray silk shirt, and black wool slacks. Your tenor sax rested on your lap and a flute on the glass coffee table next a bottle of red wine. Our conversation was lighthearted. I asked about some technical stuff such as changes, chord progressions, and if the cadenzas some saxophonists play at the end of some tunes was improvised.
You even played the changes to John Coltrane’s “Naima”. Then you did a few slick things with the melody. I asked you to play a few choruses of the ballad “Rudy My Dear” the same way you did on “A Monk and A Mingus Among Us”. Years ago, in real life, I requested you play the ballad on several occasions. You always said no but explained once, during a set at Bert’s Market Place, the bassist was unfamiliar with the tune. Anyway, in the dream, you were ready to play the ballad, but I woke up. Initially, I was upset.
Strangely, the dream made me feel good as if we had fixed our friendship. You stopped talking to me for a few years because of the story I wrote about drummer Roy Brooks, your friend. The Metrotimes published the article. I quoted you and later you swore up and down you spoke off the record. I hated that you passed away before I made things right. However, in the dream we were friends again.
I have thought about you often and I wondered how your pals Teddy Harris, George Goldsmith and Harold McKinney are doing up there in heaven. I bet God is always late performing miracles because he’s up late listening to you all jam.Tell the fellows everything is going well on the Detroit jazz scene. The current crop of jazz musicians are kicking butt. Musicians such as Robert Hurst, Geri Allen and Rodney Whitaker have continued the legacy of mentorship you all started.
I heard two lads perform with Hurst last Friday at the Virgil Carr Center. Pianist Ian Finklestein studies with Geri Allen at the University of Michigan and saxophonist Marcus Miller is in the jazz program at Michigan State University.
Finklestein reminded me of a young Herbie Hancock. Finklestein has a strong right hand and an imaginative left. Imagine what a great improviser he will be once Allen has finished schooling him.
Miller is a little dude with  giant chops. He is the splitting image of Johnny Griffin. I believe Miller is under the watch of saxophonist Diego Rivera. The saxophonist is in the luxury class of contemporary tenor saxophonists. Finklestein and Miller will be jazz stars.
I am still on the Detroit scene writing about the local cats. These days, I rarely get the chance to write about nationally known jazz musicians. Last year, I did interviewed drummer Roy Haynes and pianist Barry Harry. That was exciting. So far, I interviewed Horace Silver, Wayne Shorter, Richard Davis, Sonny Rollins, TS Monk, Gary Burton, Joe Lovano, Kenny Garrett and Regina Carter. Not to shabby for a cat with only a high diploma.
Financially, things are tough, but I am hopeful that will change this year. Donald, I just wanted to share my little dream with you. “A Monk and A Mingus Among Us” is still playing in the background and “Ruby My Dear” has just started. I want to hear it again, so I will talk to you again soon, hopefully.
Posted by Charles L. Latimer at 10:19 PM No comments:

Bob, I planned to drop you a note Saturday, the day after you unveiled your new band the Robert Hurst Group at the Virgil Carr Center, but I was sidetracked. Both sets were awesome, and the students you hired pianist Ian Finklestein and saxophonist Marcus Miller handled themselves like worldly professionals. There not much I can say about your drummer Karriem Riggins. Everybody familiar with his chops knows he’s a superb jazz drummer, and he adds something special to the bands he plays with. So I will focus on Finklestein and Miller.

They are fortunate to be under your watch at such an impressionable age. I predict-given the level of swing both displayed Friday night-they will be huge jazz stars soon. Miller is well on his way. For a little guy he has a heavy sound on the tenor sax a la the late Johnny Griffin. I wonder if Griffin is one of his influences. Bob, I think the Detroit jazz scene is going back to the Detroit Way, the matter in which seasoned jazz musicians mentored up and comers.
Things changed for a while after jazz masters Harold McKinney, Teddy Harris, and Donald Walden died. They had a strict way of mentoring young talent. When the youngsters graduated college, they could further their musical education under the care of those established musicians. However, after they passed away, nobody carried on the mentorship. Instead of serving an apprenticeship, the youngsters formed bands.
Anyway, your sets were wonderful, and people yet to hear your new albums “UNREHURST Volume 2” and “Bob Ya Head”, got a chance to hear selections from those discs, and several cuts from your first record “Robert Hurst Presents, Robert Hurst”. Finklestein and Miller soloed brilliantly as if they wrote “Incognergo,” and “Detroit Red,” two of your well-known originals.

And kicking off the second set with a medley of Thelonious Monk favorites was slick. I wonder if you’re trying to trip up Finklestein and Miller. If so, you failed because both knew the material like a baseball fan knows his favorite player’s career statistics. You tested the youngsters during both sets. They never lost their composure.
Their inexperience show on the ballad “Joyce Faye”, but once they have collected more life experiences they will be better equipped to play ballads. The Robert Hurst Group is a fine new band of up and coming and seasoned pros, and I hope you band plans to stay around for many years.
Posted by Charles L. Latimer at 1:29 PM No comments: