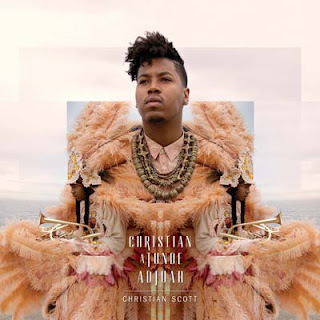 Corey is a professional barber and my friend. He’s a big music buff and a devout Christian Scott follower.  Corey sent me a text message last week me raving about Scott’s new album. I told Corey I'd buy a copy, and share  with him my thoughts about the album.
Dear Corey,
The past two days I’ve listened to Christian A Tunde Adjuah’s (formerly Christian Scott) self-titled album that you urged me to buy, and that I’m grateful you did. Honestly,  I started to lose faith in Christian after he made Rewind That, and Yesterday You Said Tomorrow. The former was too commercial for my tastes, and the latter was unfocused. Besides, I figured Christian had deserted his jazz roots.
I heard Christian for the first time when he was 17-year-old. He was the star attraction in alto sax player Donald Harrison’s band. I caught Harrison’s set at the 2001 Detroit Jazz Festival, and Christian knocked  me out. Clearly, he had spent much time picking apart Lee Morgan’s style although these days Christian sounds exactly like Miles Davis.
I became a fan of Christian, but as he evolved my feelings toward him changed. The only album he made that I enjoyed was Ninety Miles. He co-led it with Stefon Harris, and David Sanchez. Remember, I begged you to buy Ninety Miles.
After I listened to you  go on and on about Christian A Tunde Adjuah, I decided to buy it. You’re right part of it called to mind Miles Davis’ Kind of Blue and Tutu. Davis' finger prints are all over the album. The first time I played Christian A Tunde Adjuah I was hooked.
Would I recommend it? Yes, because Christian took chances that panned out, and he deserves credit. Do I consider Christian A Tunde Adjuah a jazz album? Yes. It's jazz stretched to the max. Plus, it's listenable and thought-provoking . And Christian’s most focused and daring album yet. He’s a serious musician.
For A Tunde Adjuah, Christian wrote 22 new songs. That's a lot of music for a human being to digest, but it held my interest throughout. Christian didn’t design the album to showcase his sidemen, or to show what an exceptional composer he’s become. Clearly, he went into this project with a carefully wrought plan and he executed it beautifully. Corey, I finally realize Christian will spend his entire career experimenting, or better yet stretching jazz as far as he can. .
Best,
Charles
Posted by Charles L. Latimer at 4:06 PM No comments:

Moving to the next level
Jazz Trombone player Vincent Chandler has a new album, Embraceable, in the works and he promises it's something special. On Detroit’s jazz scene, Chandler is an in demand sideman whose career spans over two decades. Chandler has worked with greats such as Joe Henderson, Wynton Marsalis, Roy Hargrove, Gerald Wilson and James Carter. Not bad company. To date, Chandler’s biggest musical achievement is the wonderful music he created with the jazz band Urban Transport, which Chandler co-led with alto sax player Dean Moore. Regionally, the band was hot. Before the band split, it made two outstanding albums Introducing Urban Transport and Urban Transport Live. Each member wrote tunes, but Chandler wrote Urban Transport's biggest hits The Beast, Seldom Blues, Just for Tonight, and The Closing Door.

Surprisingly, Chandler is largely unsung as a composer. With Embraceable, his new project, he plans to correct that. It will be his first album as the leader, the producer and the composer, and the first time nationally known jazz musicians will play his music. Bass player Bob Hurst, piano player Geri Allen and drummer Karriem Riggins have signed on. Chandler wrote seven new tightly structured tunes for Embraceable. Are the tunes structured so they leave little room for improvising? Absoulutely not. Chandler wants Hurst, Allen and Riggin to put their stamp on the tumes.  At this point, that’s all Chandler will let on about the tunes. To pay for the project Chandler has joined Kickstarter.com, a website designed to help artists raise money for their projects. Embraceable cost $4,500 to make and Chandler is banking on hitting the studio in September.

More Pepper please!
On the 28th of August, Widow Taste Records will release Unreleased Art Pepper Vol. VII Sankei Hall-Oska, Japan, a live concert Pepper played in 1980 with his band George Cables, Tony Dumas and Carl Burnett. Laurie Pepper, Art’s wife, runs Widow Taste Records and she has put out unreleased music Pepper left behind. Last year, she released the box set Blues for the Fisherman.  Unreleased Art Pepper Vol. VII is a two disc set. Pepper’s band performed some oldies such as Over the Rainbow, Cherokee and some of his well-known tunes such as Landscape, Talk, Ophelia, and Y.I. Blues. The 1980 concert was the first time Pepper had performed with his all-time favorite piano player George Cables in years. Years before, Cables left Pepper’s band to start his own. Pepper, Cables, Dumas, and Burnett were in top form, especially Pepper, roaring through the changes of fast tempo numbers like a bobsledder, but the sound quality of the discs is poor. You can hardly hear Pepper talk to the crowd between numbers. Clearly, the discs are re-mastered bootlegs. But who gives a damn. Any live Art Pepper album is worth having.

Posted by Charles L. Latimer at 9:05 PM No comments:

JD ALLEN'S 'THE MATADOR AND THE BULL' IS INTELLECTUALLY STIMULATING

A few weeks ago, I had a JD Allen marathon. JD, I listened to I Am I Am, Shine, Victory and The Matador And The Bull recordings you made with your trio drummer Rudy Royston and bass player Gregg August, the tightest trio I’ve come across in awhile. Before the marathon, I was only vaguely familiar with you. Many of your fans believe you’re a thinking man’s tenor sax player. After I experienced your albums, I have to agree with your fans .

I knew you grew up in Detroit, and in the late 80’s, you played with the jazz band Legacy before moving to New York. If memory serves me, JD, the other band members—Carlos McKinney, and Ali and Khalil Jackson—moved to New York around the same time.
JD, it wasn’t surprising that all of you succeeded. Before becoming a music producer, Carlos had tenures with Elvin Jones and Kenny Garrett. Ali played in a bunch of top tier jazz outfits, and he landed a dream job, the drum chair of the Jazz at Lincoln Center Orchestra. Khalil's music career was going strong, but he dropped it to work on Wall Street. The last I heard he was a successful broker.
Jazz singer Betty Carter was one of your mentors, I read that on your website. Most of the jazz musicians Carter helped made it big. Mark Shim, Cyrus Chestnut and Roy Hargrove come to mind. Speaking of mentors, mine, writer Bill Harris, loan  me I am I am, Shine, Victory and The Matador And The Bull.
Today, I replayed The Matador And The Bull. The tunes you wrote for it are really heady. Nothing like the swing my ears are accustom to. Of course, you can swing as Paseillo, Ring Shout, and PinYin proved. Nevertheless, it safe to say you aren’t a swing driven tenor player by nature.
I read John Coltrane was a big influence on you. I bet Branford Marsalis was also. Marsalis is a note monger and so are you. He has an intellectual approach to jazz and you do as well. JD forgive me if my comparison is off base.
Your tunes are short, and I dig that you do more than develop catchy melodies, and then allow your guys to pour their imaginations over them like syrup over pancakes. A couple of songs into The Matador and The Bull I was convinced August and Royston aren’t hog-wild improvisers. Come to think of it, your music isn’t heavy on improvisation.
Of course, there’s an improvisational component to your tunes, but each is put together in such a way at first glance it appears the trio is making up stuff as they go along, but they aren’t. You designed the tunes to have an in the moment feel.
Those aspects of your composing are there for listeners to witness and adsorb. For years, you’ve recorded with August and Royston and they’re key to your curb appeal. JD, listeners won’t be able to boogie to The Matador and The Bull, which isn’t surprising because you don’t make boogie oriented music. You  make jazz that stimulates the intellect.
Posted by Charles L. Latimer at 9:34 PM No comments: