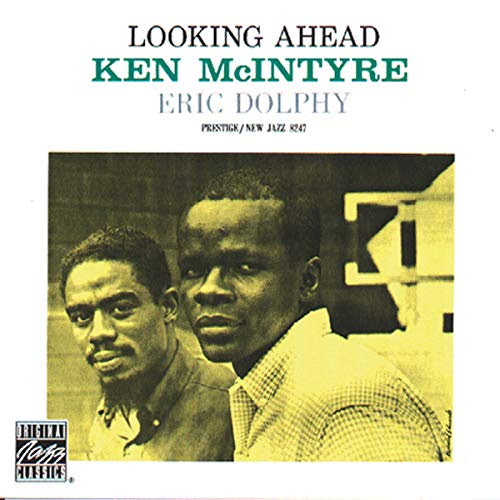 Ken, yesterday I listened to “Stone Blues,” your first album for Prestige Records recorded at Rudy Van Gelder's place in Englewood Cliffs, NJ the last day in May 1960. The blues you played got inside me right away. I felt like I was eavesdropping on a personal conversation the way your horn was talking. You should be a household name like Eric Dolphy and Ornette Coleman because you had a unique way of blowing. You could make your alto laugh and cry in the same breathe, and the blues you served on "Stone Blues" were upbeat not the woeful variety.

In fact, I like "Stone Blues" more than “Looking Ahead,” your sophomore album that featured Eric Dolphy. The album felt like his date. Did Prestige want it that way? Back then, you were a newcomer. I read you didn't know Prestige had hired, bassist Sam Jones, pianist Walter Bishop Jr. and drummer Arthur Taylor for the date until you arrived at Van Gelder's place. I bet you were nervous surrounded by those greats.

Anyway, I listened to your blues tune “Cornballs,” the first track on “Stone Blues,” repeatedly. It’s an upbeat blues not one of those life-is-so-damn-rough blues. I liked the softness of your flute on the ballad “Blanche”. And how pianist Dizzy Sal--one of your running buddies from the Boston jazz scene--tiptoed down the piano keys. Ken, on this album you had the alto and flute singing.

It bothers me you weren’t more celebrated--more of a jazz icon.

I wonder if jazz critics and jazz historians considered you just another face in the crowd. That’s a question only they can answer. Or, was your timing bad? When you got to New York Eric Dolphy, Cecil Taylor and Ornette Coleman were popular. Making a name for yourself must have been difficult given the speed those guys were playing at.

To paraphrase jazz historian Joe Goldberg (he wrote the liner notes for Stone Blues) you had high expectations. You believed you could get steady work because you were a skilled musician with two degrees in music from the Boston Conservatory. To work regularly, you discovered, required a lot of hobnobbing.

Hobnobbing wasn’t your thing. It consumed too much time, and you had mouths to feed. To provide for your wife, Charlotte, and your sons, you worked at a Post Office and taught in the public schools. Forgive me, Ken, for bringing up those lean times. People need to know your sucess wasn't handed to you. You praticed, practiced until you developed a sound, an identity. The Ken McIntyre Sound. That what I call it.

There were good times, too. I bet you reminisced a lot about the first time you played with Dolphy. In 1959, you showed up at Minton Playhouse to hear Dolphy. Trumpeter Freddie Hubbard asked if you brought your horn. It was in your car. Locked in the trunk. Hubbard made you fetch it because he wanted you to sit in. You wowed Dolphy, and he agreed to appear on “Looking Ahead”. What did Dolphy say to you after the gig, and how did you ask him to record with you?

I imagined it took place as the crowd was leaving Minton's. Hubbard and the other band memebers were packing up. Dolphy told you how good you were as he unhooked his alto from his neckstrap. Your horn was cooling off atop the house pinao.

"Man you played your ass off," Dolphy said.

"Thanks. I just came here to listen. I didn't know you wanted me to sit in. Charolette won't believe it.

"You pushed us to another level," Dolphy said

"I was real nervous. But after the second number it felt really natural like I've been playing with you for ever."

I damaged my horn trying to keep up with you, man," Dolphy said joking.

"I just got a recording contract with Prestige Records."

"I heard about that."

"Would you be interested in recording a few tunes with me?"

Dolphy praising and agreeing to record with you must have boosted your confidence. Let me stop talking about that night. It was a long 48 years ago. There're many highlights in the great career you had.

You made some wonderful music. Twelve albums, and it would take days to list all the great musicians who performed with you. The workshops you put on through The Contemporary African-American Music Organization (CAAMO), a music and performing arts educational organization, you started in 1983, help a lot of people. You were an accomplished, Ken. You should be a household name.
Posted by Charles L. Latimer at 1:46 PM No comments:

Mr. Pullen, are you familiar with Lafayette Gilchrist, a jazz musician from Baltimore who started playing piano at 18, who was influenced by Funk and Hip Hop music, and who mixes those genres with jazz. My mentor says Gilchrist sounds like you did on those Blue Note albums you made with saxophonist George Adams, which is a helluva compliment.

By the way, my mentor's name is William. Two months ago, we listened to saxophonist David Murray album “Sacred Ground”. After Gilchrist soloed on “Family Reunion,” William asked me: “Who is that piano player? He sounds a lot like Don Pullen.”

“Do you have any of his albums?”

“Just one, but I heard him in 2005 at the Harlequin Café. He did a solo performance. He played some originals and a medley of Duke Ellington compositions. The performance was okay.”

Honestly, Mr. Pullen, I did not hear the similarities right away. But I trust William’s ears implicitly because he's a true jazz aficionado. I re-listened to Gilchrist’s album “Towards the Shining Path,” and I purchased “Lafayette Gilchrist 3”.

Gilchrist style is akin to yours, particularly on “Visitors, and “Spheres of Existence” two tunes on the pianist latest album “Lafayette Gilchrist 3”. He plays every square inch of the piano. It appears Gilchrist has four sets of hands zipping up and down the keys. On the ballad “The Last Train,” he plays pretty like the tips of his fingers are flowers.

Gilchrist performs best, like you did, with a trio. I’m not knocking the work you did with saxophonist George Adams, drummer Dannie Richmond and bassist Cameron Brown. “Breakthrough” and “Song Everlasting” are outstanding albums.

You brought everything to the table on“Random Thoughts,” the album you recorded on Blue Note in 1990. Your trio made the album fun, passionate, danceable, and even a little melancholic.

I'm not sure if you disliked jazz pianists who emulate you. Be assured, however, Gilchrist is no copycat. He's your heir apparent, Mr. Pullen. If you want proof listen to "Lafayette Gilchrist3".
Posted by Charles L. Latimer at 11:54 AM 2 comments:

It's been a month since drummer George Davidson's "Drum Summit" at Bert's Marketplace, which featured four of Detroit's finest drummers Bill Higgins, Sean Dobbins, Bert Myrick and Spider Webb. Their licks and rim shots still resonates inside my ears.

For those who missed that event, I found video footage of a drum battle among three drum stylists Sunny Murray, Elvin Jones, and Art Blakey. The battle has the same level of superb drumming showcased at Davidson's "Drum Summit".

Posted by Charles L. Latimer at 7:45 PM No comments:

On October 21, 2007 I posted a blog titled "WHAT'S HAPPENING TO CYRUS CHESTNUT". I wrote the pianist recordings "Cyrus Plays Elvis" and "Genuine Chestnut" were disappointing. That was a tough statement for me to make because for years, I have admired the pianist. This YouTube video captures in three minutes what a gifted "improvisation-ist" Chestnut really is.

Posted by Charles L. Latimer at 9:33 PM No comments:

I found your solo album “Red Alone” at Dearborn Music. I dig the cover photo of you leaning against a wall holding a cigarette.

You had a surprised look on your face like a photographer yelled: “Hey, Red say cheese!” The plaid blazer you sported was really sharp. It reminded me of one I saw displayed in the window at Hot Sam’s, a men’s clothing stores in downtown Detroit.

“Red Alone” is a love letter. Mr. Garland, when you played “The Nearness of You” and “You Are Too Beautiful” was there a particular lady you had in mind--a lady who inspired you to be your best.

Growing up in Dallas, Texas, you had a colorful life. You were a welterweight boxer. You fought Sugar Ray Robinson. That took guts. Did Robinson beat you so badly you realized playing music would be a safer occupation? I’m just kidding.

I would have never guessed you were involved in such a brutal sport. Pardon the pun, you strike me as a romantic not a fighter.

As a teenager, you played the alto sax and the clarinet. How was it playing with alto saxophonist Buster Smith? I heard Smith was popular on the Texas’ jazz scene. He taught you to play and how to read music. I bet he was a great teacher. Pianist John Lewis(not the musical director of the Modern Jazz Quartet) got you hooked on the pianio.

You heard pianist Lewis playing at the recreation center. Lewis took you under his wing. Did he teach you to play blocked chords?

Mr. Garland, I don’t want to consume anymore of your time. You are probably somewhere in heaven practicing. I bet there are plenty of jam sessions around.

I’m sure God is treating you, Trane, Paul and Philly Joe like royalty. You guys made a lot of jazz folks happy. Have you heard anything about Miles?

Is Miles still in that rock/hip hop bag? Have you guys patched things up? Are you still mad at him for firing you? Miles tried to change your style. He wanted you to be more modal. You refused.

Mr. Garland I hope I haven’t asked too many personal questions. I didn’t mean to stray from my reason for writing you. “Red Alone” made me curious. It touched me.