Gerry, for weeks I’ve been obsessed with your Gerry Mulligan Meets…series. I wrote about your collaboration with Thelonious Monk and Ben Webster. Now I’m listening to what I believe is the best of the lot Gerry Mulligan Meets Johnny Hodges. I felt as if I attended the recording session. I know that sounds silly. I wasn’t even born when you and Hodges produced this masterpiece. Actually, the albums feels like you made it in you house, and Hodges dropped by unannounced. When two great jazz musicians meet some magnificent music is bond to ensue.

You jokingly told Hodges you would only let him inside if he had his alto. Before leaving his house, Hodge grabbed his alto first, then his wallet and his car keys. You guys drank, and gossiped. Then you scooped up your baritone. You wanted Hodges is critique a new tune you had written titled “Bunny." You wrote the composition in his honor, but you didn't tell him that beforehand. You wanted to gauge his reaction first-if he cringed after hearing the melody. Or if he grabbed his horn to join in.

Hodges liked "Bunny" right away. You were only two choruses into “Bunny” and miles away from the bridge before Hodge joined you, offering counter-melodies like he had co-written the tune. Hodge was the competitive sort. You understood the altoist had to be tough grewing up in Ellington's family.

So, after you guys finishing "Bunny," Hodge didn't allow your horns to cool down. Hodges called the ballad “What’s The Rush”. Ballads were his hallmark. He played them with such dignity and warmth.

You didn't challenge him. When it was your turn to solo, it sounded as if you just shut your eyes and did the best you could. Gerry, I must say it was smitten by how you caressed every note. I bet you even made Hodge blush, and maybe a little envious.

You were more assertive on “Back Beat" and “Shady Side,” refusing to be outdone by Hodges in your dwellings. On “Shady Side,” you took the melody by the hand, and strolled through the changes.

Gerry Mulligan Meets Johnny Hodges wasn’t conceived as I described. Journalist Nate Hentoff, who wrote the liner notes, didn’t say how this album was conceived. To me, the album felt like all you wanted to do was blow with a close buddy.
Posted by Charles L. Latimer at 12:13 AM 1 comment: 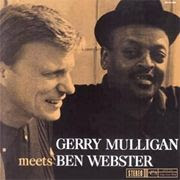 Hey, William do you remember the telephone conversation we had a few Thursdays ago about the Gerry Mulligan Meets ..., a series of collaborations the baritone saxophonist cut for Verve and Riverside? The series featured such stalwart swingers as Johnny Hodges and Ben Webster.

Hours before I called you, I’d listened to Mulligan Meets Monk. Before I could give you my take on it, you encouraged me to listen to Gerry Mulligan Meets Ben Webster. You said the album was perhaps Mulligan’s finest collaboration.

This weekend, I spent some quality time with the album. The saxophonists did some wonderful individual blowing, especially on "Go Home" and "For Bessie". But the album wasn’t Mulligan’s finest collaboration by a long shot. Mulligan didn’t have the same affinity he had with Thelonious Monk and Johnny Hodges. Mulligan was more in sync with them as if he could read their thoughts. That kindred connection was missing from Mulligan’s meeting with Webster.

In the past, you've accused me of rushing to judgment. Occasionally, I’ve been guilty of that. But, I listened to this album more than the others. I even wondered why I wasn’t immediately taken by Mulligan and Webster. I have it figured out.

They seemed reluctant to challenge each other. Had they, this date would've been an all blowing session. Sadly, I wanted to shelve this album after listening to their uninspired rendition of Chelsea Bridge and Sunday. But, I stuck it out hoping they would loosen up.

On "Go Home" and "For Bessie," they jelled, but sadly they didn't sustain it. William, listening to Gerry Mulligan Meets Ben Webster did not excite me as much as it did you.
Posted by Charles L. Latimer at 10:42 PM 1 comment:

Of the five albums in your Gerry Mulligan Meets… series, "Mulligan Meets Monk" is the one I can’t stop listening to. The others you cut with alto saxophonists Paul Desmond and Johnny Hodges; and tenor saxophonists Stan Getz, and Ben Webster are good, but you and Monk play like soul-mates.

I read biographer Jerome Klinkowitz’s take on “Mulligan Meets Monks” in his judgmental book about your career “Listen: Gerry Mulligan An Aural Narrative In Jazz”. Klinkowitz made it seem as if you were intimidated by Monk. I think he got it wrong. To me, you were Monk’s equal.

“Mulligan Meets Monk” could’ve easily been into Monks baby. The pianist was domineering-although I loved every Monk album I’ve listened to-I always felt Monk was self-indulgent. Save for the two albums on Riverside "Thelonious Monk Plays Duke Ellington" and "Unique Thelonious Monk," the pianist only covered his own compositions.

You had to be at your best to record with the pianist. In 1957, when you pitched this idea to Keepnews Monk was the rave. You demanded five of the six selections on the album be Monk’s classics. I admire the way you handled Monk’s creations. On his ballad “Sweet and Lovely” I thought at any moment the baritone would float out your hand. You played that softly. It didn’t even sound like you were playing such a huge horn. On “Straight No Chaser” and “I Mean You,” you swung your as off, proving you’re in Monk’s league.

After listening to you get down with Monk, I wanted to know more about your relationship with the pianist. I read you first jammed with Monk in 1954 after one of his gigs in Paris.
The chemistry you had with him shocked you. You could’ve jammed all night, but after hours listening to you and Monk riffin', blowin', and just puting your instruments through hell your wife intervened, telling you it was time to wrap it up.

Two years, later you’d launched the Mulligan Meets series with Desmond. But the recording with Monk was the one that got folks to take notice. That’s Klinkowitz version. I can’t speak for your fans but. Mulligan Meets Monk got me interested in the series.
Posted by Charles L. Latimer at 11:12 AM 1 comment: 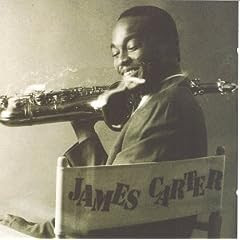 Fifteen years ago, I purchased your debut album JC On The Set at Car City Records. For the life of me, I can’t recall if I bought it new or used. After listening to you solo on Baby Girls Blues, Worried And Blue, and Blues For A Nomadic Princess, the best selections on the album, you became my favorite saxophonist.

The way you raced through the changes, and the nifty tricks you did on the tenor sax was unlike anything I had ever heard. The camaraderie you had with pianist Craig Taborn also grabbed me.

Taborn could perform the same tricks on piano you did on tenor and baritone. For example, on “Blues For A Nomadic Princess” you began softly. Then took your tenor on a wild ride, blewing like a madman. I thought your horn would explode. By the conclusion you had mellowed.

Then Taborn took over, touching the keys softly like a snow flake melting on cotton. Mid-way through his solo he became angry, pounding and hammering away like he was working out his aggression on the piano. I was so impress I wanted to sign up for piano lessons.

You’ve released 11 solid albums since your debut. I have every one of them. I’ve watched you mature. When you released JC On The Set you were a whippersnapper with an ocean of talent. You never wasted it. You became a world class bandleader, and a musical ambassador of Detroit. When you hit the big time you did not shunned Detroit. I admire your for that.

On your albums there are Detroit jazz musicians. Did you make a promise when you hit it big you would help your friends? Was it a promise your mentor saxophonist Donald Washington asked you to make when you were his most promising protégé in that boot camp called Bird/Trane/Sco/Now?

At some point, you should be commended for your commitment. Too many Detroit jazz musicians who made it thumbed their noses to Detroit. That’s shameful. Your parents deserve most of the credit for raising you to be upstanding.

Anyway, James your music has meant the world to me. I used to listen to your albums daily. No kidding. I wore out four copies of JC on the Set. Last week I listened to the album for the first time in a year. You and Taborn solo’s still excite me.

HERBIE HANCOCK ON MY MIND 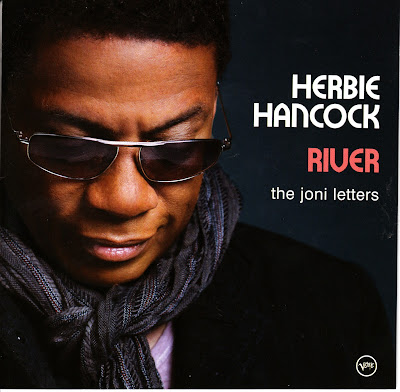 Herbie, I’m not writing this blog to apologize for the mean things I wrote about your performance at the 2007 Detroit International Jazz Festival. I meant every word. You have been on my mind lately. A few Saturdays ago, I got into a discussion with the founder of the Detroit Groove Society Andrew Rothman about your album “River the Joni Letters”.

Andrew is a real jazz aficionado. He host jazz concerts in the living-room of his Bloomfield Hills, MI home. You should look him up the next time you’re in Detroit. He’s a nice guy and he will talk your ears off about anything concerning jazz.

Andrew and I were standing in line at Baker’s Keyboard Lounge waiting to hear this new local jazz band called Sean Dobbins and the Modern Jazz Messengers. While we waited, Andrew asked what I thought about your album “River the Joni Letters” winning the coveted album of the year at the Grammys.

I told Andrew I hadn’t heard your album, and added I no longer thought of you as a jazz musician. I viewed you as a contemporary pop instrumentalist. I loved your work for Blue Note Records especially “Takin’ Off,” “My Point Of View,” and "Inventions and Dimensions". But I hated your Verve recordings “New Standards” and “1+1,” and your set at last year's Detroit jazz fest made my skin crawl.

But talking to Andrew made me want to buy "River". This afternoon I purchased it, and Herbie, an hour ago, I finished listening to it. I can’t say “River the Joni Letters” deserved the album of the year because I haven’t heard the other albums that were nominated. But, Man I really love this album.

Normally, I listen to an album over and over before I make any comments. “River” caught my senses right away. There isn’t a flaw on it. The best tracks are Court and Spark featuring Norah Jones, Edith and the Kingpin featuring Tina Turner, and The Jungle Line featuring Leonard Cohen. Herbie, your soloing on the four instrumental selections are exquisite. Herbie, Andrew also wondered if you winning would be good for jazz. I said absolutely not. Winning was an individual achievement only. Your market value would increase, but the industry wouldn’t rush to promote jazz, and major record companies such as Atlantic and Warner Brothers wouldn’t be anxious to resign the jazz musicians they downsized several years ago.

As I stated initially, I’m not apologizing for the mean things I've written about you. I just feel compelled to congratulate you on making a flawless album.
Posted by Charles L. Latimer at 6:11 PM 1 comment: