The jazz saxophonist James Carter returned to his hometown, Detroit, Friday evening with his longstanding organ trio drummer Alexander White and organist Gerard Gibbs to perform music from his current project Django Unchained at the Paradise Jazz Series. Carter has been touring the globe in support of the project, which has morphed into a sort of a tribute to the iconic Gypsy jazz great Django Reinhardt. Carter has an obvious affinity for Reinhardt’s work, having explored some of his well-known compositions on the wonderful album “Chasin' the Gypsy.” This time out, Carter has modernized some of Reinhardt’s obscure compositions. Before Carter started the two-hour concert last night, he read off the setlist, which included Reinhardt's “Hedgehog Waltz,” “Castle of Dreams,” “Melodie Au Crepuscule,” and  “Heavy Artillery. Carter also worked in a solo birthday salute to the great jazz vocalist Billie Holliday. Carter performed a soul-numbing rendition of Holliday’s “God Bless the Child” mixed with “Happy Birthday,” which was one of many highlights throughout the concert. The near capacity crowd buckled down for a night of high tier swing that only a saxophonist of Carter’s daring is capable of delivering. Carter was elated to be performing for his hometown, offering one hellacious solo after the other, and closing tunes with his trademark cadenzas. If Sonny Rollins ever relinquish the crown as the reigning king of jazz improvisation, Carter should be the first in line to receive that distinction. Carter’s sidemen were of good form as well. Gibbs has been Carter’s right-hand man coming up on two decades now was the crowd favorite, playing the absolute shit of his Hammond B3. Gibbs is one of the top jazz organists around, and he has a gift for working a crowd. Gibbs loves to clown around. For example, last night there was a moment during a solo where Gibbs played the organ with his chin, and on “Impromptu” he did sort of a tap dance on the paddles of the organ that drove the audience nuts. White has been with the trio for a few years now. He’s the first of the current field of millennial jazz musicians from Detroit to play in a world-class jazz band. By all accounts, White loves the job.  White replaced Carter’s longtime drummer Leonard King.  White is a confident and a tasteful drummer. Tasteful like drummers Joe Chambers and the late Detroit Bert Myrick. The zoom lens was put on White late into the second set on “Impromptu.” It was his first lengthy solo of the night. When he finished, it was clear, at least to me, White is the new engine that powers the trio.
Posted by Charles L. Latimer at 5:50 PM No comments:

'BEHIND THE SWING: A GLIMPSE INTO THE LIVES OF SOME OF THE WORLD'S FINEST JAZZ MUSICIANS' AVAILABLE NOW 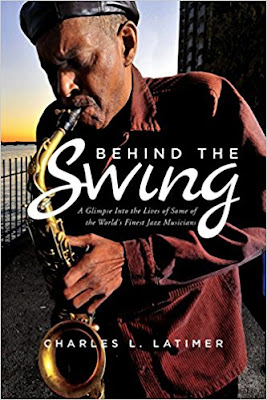 Here's some praise about my new book "Behind the Swing" from noted authors and jazz experts Herb Boyd and James Gallert:
There was a time in the fifties and sixties when practically every jazz ensemble of note included one musician from Detroit, or at least one who refined his or her development in the city.  What Charles Latimer demonstrates to a remarkable degree in Behind the Swing--more than a decade of his articles from the Metro Times--is that there were countless other equally proficient composers, teachers and performers worthy of wider recognition. Latimer’s book is an insight aperture of jazz in Detroit, and he embellishes that musical wellspring with lively discussions with a number of notable visitors, such as Wayne Shorter, Ravi Coltrane, and T.S. Monk.  In many ways, Behind the Swing is on the beat and ahead of its time.
--Herb Boyd, author of Black Detroit—A People’s History of Self-Determination (Amistad, 2017)
"Latimer's fine compilation pulls together both tradition jazz and Avant-Garde jazz musicians.  His easy way with words and natural curiosity about the music he loves affords him a good starting point for interviews.  I learned many new, interesting facts about the musicians, many of whom have been overlooked by "mainstream" scribes.  I definitely recommended Behind the Swing for serious jazz supporters!"
--James Gallert, jazz historian and co-author of Before Motown (University of Michigan Regional 2001)
Posted by Charles L. Latimer at 9:11 AM No comments: