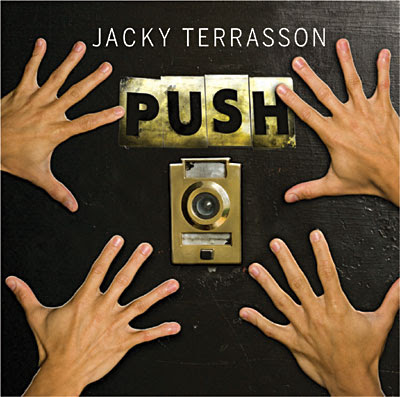 2.) Tia Fuller, Decisive Steps, (Mack Avenue Records)
Fuller’s break out album that announced to the jazz world that Fuller is a clever and formidable saxophonist.

3.) The Clayton Brothers, The Same Old Song and Dance (Artist Share)
The Clayton's are the first family of jazz. I'd take them over the Marsalis clan any day. This album is a straight up swing fest from start to finish.

5.) Jacky Terrasson, Push (Concord Jazz)
The best rendition of Thelonius Monk's Ruby My Dear and 'Round Midnight I've ever heard. Terrason has been unsung for too long.

6.) Marc Cary, Focus Trio Live 2009 (Motema)
I can't say for sure civil rights advocates Martin Luther King Jr. and Malcolm X were jazz fans, but I bet they would've loved how Cary improvised around excerpts of their speeches. Cary is the most creative jazz pianist to every sit at a piano.

8.) Milton Suggs, Things to Come (Skiptone Music)
Suggs is the kind of jazz vocalist you would get if you mixed Johnny Hartman's and Kevin Mahogany's DNA. Suggs version of We Shall Overcome and Lift Every Voice and Sing made my pitbull cry.

9.) James Moody, Moody 4B (IPO Recordings, Inc.)
My sentimental favorite. The recently departed saxophonist was a blue-collar jazz musician who knew how to make good down home swing.

10.) Benito Gonzalez, Circles (Furthermore Records)
A percussive pianist in the tradition of McCoy Tyner. This is album is a bombshell. Then again, it’s impossible to blew it with a supporting cast of Ron Blake, Myron Walden, Azar Lawrence, Christian McBride, and Jeff -“Tain” Watts.
Posted by Charles L. Latimer at 12:35 PM 1 comment:

"James Moody is dead,” my friend Cory the barber announced. Then he paused. In the background, I heard James Moody’s last album Moody 4B playing. The tenor saxophonist wailed away on Billy Stayhorn’s Take the A Train. The great pianist Kenny Barron hounded Moody like an ornery supervisor. The news Moody died from pancreatic cancer upset Cory. He considered Moody a fine jazz musicians who never surrendered to any jazz fads. Moody deserved the accolades he received four Grammy nominations, Medal of Honor for Music, and countless other recognitions. The horn-smith always made superb jazz music. He played meaty and meaningful solos. He never resorted to purposeless flights of improvisation. The guy was too darn classy for that. Such behavior was for rank and file amateurs starved for attention. Moody was a skilled tradesman at heart. He developed his chops in the Dizzy Gillespie big band along side future stars Thelonious Monk, Kenny Clark, and Milt Jackson.
“My editor informed me yesterday,” I said,
“I hate I missed his set at the Dirty Dog last year.
“I interviewed him a week before. At, 85, he still toured over 200 days a year,” I said.
“The man loved his job.”
“You got that right”.
“The music he made will live forever.”
“That's for sure.”
“How many times did you interview him”?
” Twice”.
“I heard he was funny.”
“The first time I interviewed him he was touring with pianist Benny Green, and vocalist Nneena Freelon. I forgot who the other band members were. Anyway, when I talked to Moody they were on a tour bus. They stopped at Cracker Barrel restaurant to eat. Moody stayed on the bus. He refused to patronize a restaurant with the word cracker in the name, he said. I laughed, but the man was dead serious. It dawned on me Moody came of age when bigotry and racism was overt. The second time I interviewed him we talked about his music, his bout with alcoholism, and his opus Moody’s Mood for Love. When the song exploded, Moody lived in Europe. Jazz vocalist Babs Gonzales begged Moody to come home to take advantage of the song’s success. I played At the Jazz Workshop, an album he made in 1959, while I interviewed him. Moody asked who was playing the flute. He was surprised when I said It was him.
“You couldn’t expect him to remember every solo,” Cory said. He yelled to his daughter, Be bop, to get her things ready. Her mom was coming to pick her up.
“How's Be bop dealing with his death”?
“She’s been playing his albums Wail Moody Wail, Moody’s Mood for Blues, and Homage for the past two days,” Cory said.
“I was sad at first. Then I realized Moody had a great life. He spent decades traveling the world playing music he loved. Eighty-five years, is a long life. I can only hope I live that long,” I said.
Posted by Charles L. Latimer at 1:34 PM No comments:

Today, Mr. Webster, I found a copy of Jazz Masters of the 30’s by jazz trumpeter Rex Stewart. I purchased the book a few years ago at Street Corner Music, and I just got around to reading it this afternoon. The book is different from other books about noted jazz musicians written by jazz critics, historians, and journalists. However, Jazz Masters of the 30's was Stewart's personal account of his relationship with many jazz greats such as Coleman Hawkins, Fletcher Henderson, Duke Ellington and Sidney Catlett. Stewart revealed things about them only an astute insider would know. Many of the articles in “Jazz Masters of the 30’s” Down Beat magazine published. A fine jazz journalist Stewart proved to be.
As I write this, Mr. Webster, I am listening to an album you made with Coleman Hawkins for Verve Records in 1957 Coleman Hawkins Encounters Ben Webster. Do you remember that recording? The great Norman Granz produced the album, and he hired an all star rhythm section Oscar Peterson, Ray Brown, Herb Ellis and Alvin Stolier. You all kicked off the recording with Blues for Yolande and followed up with the ballad It Never Entered My Mind. You and Hawkins took turns seducing the melody. Do any of those details jog your memory? You made a ton of fine albums, so it would be foolish of me to believe you would remember all of them.
Anyway, Stewart also wrote a piece about Hawkins, which I disliked. Stewart implied the saxophonist was aloof and pompous. Stewart recounted this scene where Lester Young and Billie Holiday played a set at a dive in Harlem. Hawkins showed up and cut in. After the set ended, the crowd cheered, and Lady Day told them it was her pleasure to play with the greatest tenor saxophonist of all times Lester Young. The club was so quiet you could hear a fruit fly belch, after Lady Day made that statement.
Mr. Webster, Jazz Masters of the 30’s was a little gossipy. Stewart shared his colleague’s idiosyncrasies. In The Days with Duke, an essay about Duke Ellington. Stewart said Ellington was a clothes horse, and superstitious. If a button was loose on his coat or his blazer, Ellington would immediately discard it. Some members of the orchestra took advantage of Ellington’s superstition. For instance, if Ellington wore a coat they liked, after he took it off, they would deliberately loosen a button, knowing Ellington would give it away. Stewart did not say which members tricked Ellington.
I particularly, enjoyed the account of his relationship with you. In the articled Frog and Me, Stewart exposed your soft side. According to jazz lore, you had a quick temper. I heard you threw a woman out a window. I cannot remember where I read or heard that, but I figured it was a lie. Stewart acknowledged you were temperamental at times. However, you were equally generous, too.
Stewart revealed things about you I bet most people are unaware of. Mr. Webster, did you really save fellow tenor saxophonist Lester Young from drowning? Stewart explained Young was swimming in a river his hamstring cramped. You rescued him. Stewart also detailed how you stopped a woman from committing suicide. Friends down on their luck could rely on you. Stewart wrote you were a pool shark as well, and you avoided cutting contests. You believed they were frivolous. Showing up a rival seemed beneath you.

You were sort of a novelist on the tenor saxophone. I loved the ballads you immortalized Where Are You, When I Fall in Love, In the Wee Small Hours of the Morning and You’re Getting to Be a Habit with Me. You played each ballad at what Wynton Marsalis dubbed grown folk’s tempo. I enjoyed Frog and Me the most because Stewart exposed your gentle side.
Posted by Charles L. Latimer at 11:53 AM No comments: